Our new SLK350 arrival is wowing the crowds, and doing a good job of winning us over, too 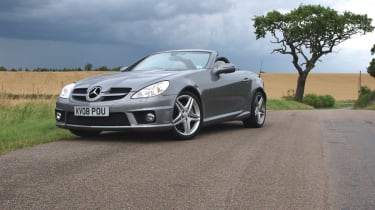 Don’t know about you, but I have a huge blind spot when it comes to Mercedes-Benz models that don’t have the letters A, M and G somewhere near the end of their title. I don’t have the same problem with non-‘M’ BMWs, nor with Audis that don’t sport an R, S or RS badge, but for some reason I automatically assume that any Merc that hasn’t been fettled by Aufrecht Melcher Großaspach will be a bit… ordinary.

My assumption has been challenged recently, though, starting a couple of months ago when I discovered that one of these ‘ordinary’ Benzes – an SLK350 to be precise – was to become my next long-termer. Needless to say, the first thing I did was flick to The Knowledge to find out exactly what the 350 is made of – and how it stacks up against the AMG version it sits below in the range. OK, so the SLK350 has a 3.5-litre V6 where the SLK55 AMG gets a 5.4-litre V8 – as much can more-or-less be figured out from the badges – but there were some surprises in the columns that followed.

Things looked even better when the spec sheet for what would be ‘my’ car arrived in the post a few weeks later. For a start it wasn’t going to be in the oh-so-predictable silver hue found on so many SLKs. Instead it would be painted Palladium Silver Metallic. Or, as I like to call it, grey. Far more purposeful. Making it look more purposeful still would be a full AMG body kit (£2605) and some 18in five-spoke AMG alloys (£1180). Tidy.

This was just the tip of the options iceberg, though. There would also be (very deep breath) sports suspension, variable assistance steering, the 7G-Tronic automatic transmission, leather upholstery, climate control, heated seats, ‘Airscarf’ neck-level heating, a transparent wind deflector, an 11-speaker Harmon/Kardon surround-sound system, a DAB tuner, an iPod connection, a six-disc CD changer, a telephone kit, a cuddly toy, black ash wood trim, rain-sensing wipers, headlamp washers, auto dimming mirrors and remote operation of the folding roof from the key. Ticking all those boxes adds some £11,565 to the 350’s £36,855 starting price, leaving very little change from £50K in total. Yikes. And it hasn’t even got xenons (£730), steering-wheel gearshift buttons (£200) or a cup holder (£30)!

Unusually, I’d already driven my new long-termer before it arrived at evo for its Fast Fleet duty. You see, KV08 POU had already spent six months on Mercedes’ UK press fleet (hence why it arrived with over 5000 miles on the clock) and it had paid a visit to Evo Towers during that time. My initial impression back then was that it felt sportier than I expected, particularly the firm ride (the sports suspension no doubt helps here) and the way the 7G-Tronic gearbox wouldn’t hesitate to kick-down aggressively to get that big V6 shoving you forward with maximum effort. It was also clear that living with an auto ’box without any means of influencing gearchanges manually with both hands still on the wheel would take some getting used to.

Having now spent a couple of weeks with the SLK, that’s still something I’m trying to come to terms with, but KV08 has already managed to charm me in a number of other ways. On our first weekend together it proved the perfect companion for seven hours of cross-country driving – rapid and relaxing, and not as thirsty as I feared it might be – and, much to my surprise given how many SLKs there are out there, it’s been turning heads everywhere it goes, evening eliciting a ‘Wow!’ from the mouth of one pedestrian. Seems that while the SLK has been off my radar, many see it as a special thing indeed. I’ve got a feeling I might be joining them.