Revised Merc SLK350 is keener than ever before, but is it enough to threaten Porsche’s new Boxster RS60? 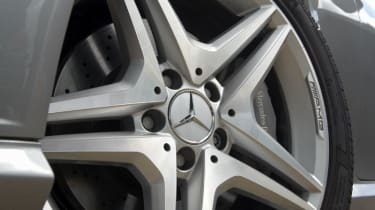 Boxster versus SLK equals foregone conclusion. That’s how it’s always been, ever since these two first faced up to each other back in 1997. Whatever Mercedes has thrown at the SLK – funkier looks, more power, sharper chassis, even more power – it’s never been enough to match the baby Porsche’s sheer driver appeal.

So why should things be any different in 2008? Because Mercedes finally appears to have realised that there’s more to fun driving than horsepower. OK, so the two cars that show this off to best effect, the CLK Black Series and C63 AMG, happen to have been at the front of the queue when brawn was being handed out, but they also have the ability to get round corners in a highly entertaining fashion.

That’s certainly not something you could have said about the original SLK, and while things took a turn for the better when the second-generation version arrived in 2004, that car always hinted at untapped potential, a seam of talent that Mercedes has so far been unable to mine. But if the blurb’s to be believed, the 650 changes that have gone into this revised, 2008 SLK350 promise to ‘emphasise the car’s sporty character’. In other words, allow it to kick Boxster butt.

Foremost amongst the changes is the uprated 3.5-litre V6. It hasn’t just come in for a gentle massage, but has received the full, stamp-on-your-back Turkish pummelling. It’s got new valvegear, a new intake manifold, a higher compression ratio and a rev limit raised to 7200rpm. All this means there’s now 301bhp for your right foot to play with – 33bhp more than before. Seems only right to team it to a manual gearbox for our test, even though Mercedes admits that some 95 per cent of buyers will tick the £1610 box marked ‘7G-Tronic’.

Combine the updated engine with some detail changes inside and out, and the SLK350 looks fitter than ever before. Trouble is, the Boxster has never been much of a couch potato. The fact its bodywork hasn’t changed much over the years is merely an indication that Porsche has chosen to spend its development cash where it counts – underneath. But occasionally even a firm as single-minded as Porsche can be a little indulgent.

Meet the RS60. No, not Porsche’s 60th birthday present to itself (although that would be a reasonable assumption), but a model that celebrates the victory of the Type 718 RS60 Spyder at the Sebring 12 Hours in 1960. As a further nod to this historic success, only 1960 examples will be built, but what you really need to know is that this tweaked Boxster S features a sports exhaust with modified main silencers and twin pipes, improving gas flow, liberating an extra 8bhp (bringing the total to 299) and, perhaps most impressively, giving the baritone Boxster a rich, full, operatic voice.

Shame not to let it sing. Find a good stone wall, drop the canvas roof, select second gear at jogging pace and let the engine do its thing. It chunters to start with, before taking on a bassy rumble that peels back as the wailing flat six becomes increasingly strident and insistent towards the red line. The sound is clearer, purer, less muted than the standard Boxster S – and it teaches the SLK350 a significant lesson in the art of aural appeal. Mercedes can do magic with V8s, but extracting high notes from a V6 is a trickier business, and this one seems unable to decide whether it should be refined or full-blooded, so settles for making a fizzy, breathy noise that fails to prickle a single hair.

The SLK350 may not sound as fast as the RS60, nor does its acceleration feel quite as penetrating as a result, but its shorter gearing and more generous torque (265lb ft plays 251, although it arrives 500rpm later) mean it holds its own when we put the timing gear on the cars at the Millbrook Proving Ground. In fact, were it not for the rain, which hands an instant advantage to the mid-engined Porsche with its superior traction, we reckon the SLK would edge ahead of the RS60. Not bad considering it weighs 130kg more than the Porsche.

Not a chance of it matching the Boxster’s performance when you hit the middle pedal, though, as Porsche has chosen to equip our car with the fabulous, if fabulously expensive, PCCB ceramic-composite brakes. Cue amazing halting ability. A tiny bit of extra pedal travel does develop after a few laps at Bedford, but there’s no suggestion of fade. The same can’t be said of the Merc, though. After three hot laps the pedal’s gone mushy, even though the traces show that actual braking power is barely diminished, and when John Barker and I pull in for a driver change we find smoke pouring from all four wheels. The intrusive stability control has been acting on the brakes even though it’s turned off. The fumes are so thick and acrid that we feel sick for the rest of the day…

THE NEXT DAY, BEDFORD is behind us and the B660 lies ahead. Henry Catchpole is leading in the Boxster; I’m behind in the SLK, absorbed in the spectacle playing out ahead of me. The RS60 is so in tune with the road. It dips, flicks and darts, seeing off corners with a seductive wiggle of its hips. You can just tell where its engine is located by the way it carves into corners: rock-solid with barely a trace of roll or inertia.

The SLK seems to be travelling along an entirely different piece of tarmac. There’s no sense of flow here. Instead the Merc gets itself all twisted up in the corners. The loaded front wheel, having to cope with the weight of the engine as well as lateral forces acting on it, seems to buckle under the pressure, succumbing to understeer much sooner. And more suddenly. There’s little elasticity at the limit – you’re either gripping or slipping.

Breach the limits in the Boxster and there’s no intimidating bite, but a steady flow of friendly, useable information to help you get things back on track. The steering is a particular highlight, because it never loses its delicacy or finesse. In the Merc it’s a less exact science, largely because you’re not so in tune with the car. There’s excessive vertical suspension movement, so the SLK takes longer to regain its composure, plus the pedals and steering don’t operate with the same machined feel as the Porsche’s. As a result you find yourself sawing at the oversized wheel, taking two bites at each corner, the first stab of lock to get the car heading in the right direction, then another to more accurately select your line.

Tremors only rarely upset the chassis’ composure, though, and the presence of a conventional gearstick between the seats undoubtedly brings an added dimension of driver appeal to the SLK. It’s not a great ’box, suffering from a rubbery shift, but it’s a better bet than the 7G-Tronic we also tried. That has no genuine manual mode, so although you can nudge the lever to select a gear, it will still automatically change down if you press the accelerator far enough (not necessarily to the floor). It’s hugely frustrating, especially when it happens as you’re exiting a corner.

Even though I have full control, keeping the RS60 in view is a tricky business. But as Henry points out when we stop (he wide-eyed but unruffled, me wishing I’d used more deodorant this morning), ‘SLKs aren’t designed to be hustled along like that.’ He’s right, of course, but why should that be the case? Why does the Merc exhibit a lack of focus and reward? The easy answer is because it’s chiefly designed for the fake tan and Botox brigade. But surely a snappier throttle response, more finely tuned damping and better steering wouldn’t make it any harder to park outside Harvey Nicks. Nor would they do untold damage to the SLK’s key strengths – its comfort and refinement.

In those areas it has the RS60 licked. Tin-top up, the SLK is hushed and makes far less fuss of long distances than the firmly sprung Boxster, which also suffers due to the fitment of 19in wheels as standard. There are other flaws in the Porsche package, too. JB comments that ‘the gearchange feels as though the clutch isn’t disengaging fully, causing the occasional graunch’, while snapper Andy Morgan, who has an eye for these things, reckons that ‘it’s starting to look old and derivative now’. With the roof up it can look rather as though a turret has been plonked on top, too.

No such concerns for the SLK. The nifty roof is perfectly integrated and the spit-and-polish facelift has done the trick. The two-part treatment of the lower air dam may look like a handlebar moustache, but it works. Inside it’s less impressive, though. Cheap plastics and an uninspired layout are the major faults, creating a drab interior that fails to stir the soul.

It’s almost a relief to drop into the lower, grippier seats of the Boxster and come face to face with the uncowled instrument binnacle (unique for the RS60). All the switches and surfaces are more tactile and robust, although you have no choice over the colour scheme – the Sebring car was silver with a red cabin, so that’s what you’re given here, too.

Want more choice? Then buy a Boxster S. Less exclusive, but you can choose the colours and, for £1102, get the sports exhaust too. Either way, you’re getting the best drop-top sports car in the world. The SLK, for all its improvements, never engages you the way the RS60 does. Mercedes is still playing catch-up.