The roof stayed up as the temperature dropped, but the Mercedes still captivated the driver 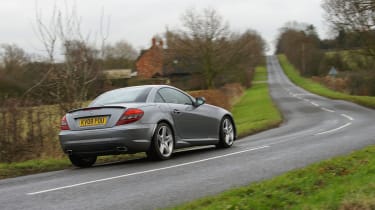 I’ve had to give in. Freezing temperatures and the constant grimy spray being thrown up by other vehicles has meant the SLK’s roof has stayed firmly in its raised position for a few weeks now.

I had thought this might be when I’d start to lose interest in the Merc, as the few roof-up journeys I’d made during the preceding months had all seemed a touch disappointing, no doubt because they lacked the sense of freedom that comes with having only sky above you. But instead I’ve found new things to enjoy about the SLK.

There’s the £1215-worth of optional Harman/Kardon stereo kit for a start, which adds a DAB tuner (which never loses reception), full iPod control (very convenient, if a little slow-witted) and eleven speakers (in a two seater!). It sounds very good indeed.

And then there’s the grip. Or rather the SLK350’s ability to overpower what grip it has. Despite having gained some fresh Pirelli P Zeros during its recent stay back at Mercedes HQ, KV08 remains a car you need to tread carefully in when the roads are slimy. Especially on third-gear bends, I’ve found, where your full attention is required if you want to find the sweet spot where you’re using as much of the car’s 301bhp as possible without awakening the stability control.

So the SLK is not impervious to poor weather. But you know what? I reckon it’s all the more interesting for it.