A short holiday to the Lake District proved the capability of the SLK350, but sun was in short supply... 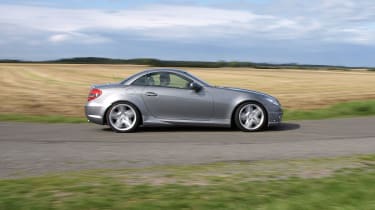 First proper test for our new SLK: a short holiday for two in the Lake District. As you’d expect from a two-seater, the Merc’s boot isn’t huge, but neither is it toothbrush-and-a-change-of-underwear tiny; it happily swallowed a couple of mini suitcases along with waterproofs, walking boots, a couple of rucksacks, a camera bag, a tripod and a packed lunch. You certainly wouldn’t be heading off to the airport with two 20kg suitcases in an SLK, but it’s far from impractical.

Pity that the full-to-the-brim boot on the journey to the Lakes and back, and the incessantly drizzly weather while we were there, meant the SLK’s roof had to stay firmly in its raised position for the entire break, particularly as it has taken to creaking constantly and in the most annoying fashion when it’s up.

After much groping around over my right shoulder to identify the source of the offending noise, I have now fashioned a temporary cure: a piece of cloth stuffed strategically in the complex hinge mechanism just as the roof closes. I’ll see if I can find a permanent fix when (if?) it next stops raining.

I’ve also had to replace one of the bulbs for the rear number plate this month. It would no doubt have gone unnoticed for months, but the display in the Merc’s instrument binnacle helpfully reported the problem to me, even identifying which ‘licence plate lamp’ was at fault. Very handy.

Such niggles aside, I’m really enjoying running the SLK. I look forward to driving it each morning, particularly on those rare occasions when the sun is shining, and the long route to work is currently the only one I use, which has to be a good sign. It probably also explains why the 350’s fuel consumption has taken a dive this month. Well, that and the fact that the Merc and I have also been to a trackday, but more about that next time…