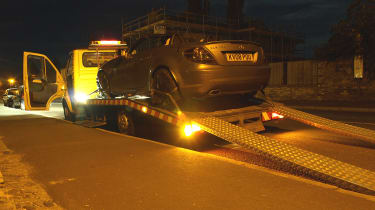 Car of the Year had meant I hadn’t driven the Mercedes for a week, so I was rather pleased that it was a mild mid-October evening when I finally got behind its wheel again. It was an opportunity to lower the SLK’s roof that couldn’t be missed, so I pulled the switch back, let the roof do its thing and set off for home.

And very pleasant it was too – right up until the moment, about 45 minutes later, when I pushed the switch the other way to raise the roof and… nothing happened. No movement, no whirr of motors, no warning messages or beeps. Nothing. Uh-oh. I switched the ignition off and back on again a few times (well, it works with computers), I prodded and poked beneath the bootlid, I checked the fuses, but nothing would bring it back to life.

So I called the AA. Despite their best efforts, they were similarly flummoxed. All they could do was take the car away and store it somewhere secure and under cover overnight.

The next day Mercedes’ press office collected KV08 and kindly dropped off another SLK for me to use while they looked into the problem. Interestingly, the stand-in car was almost identical in spec – same engine, colours, wheels, body kit – but with two differences that really stood out: the addition of xenon headlights (a £730 option) and the absence of sports suspension. The former allowed me to fully appreciate how mediocre the non-xenon items on ‘my’ car are, while the latter made me realise that the 350 needn’t crash and clomp its way along rough roads. Without the firmer suspension the SLK’s ride is softer, obviously, but the car also feels lighter on its feet, and this, ironically, encourages a more enthusiastic driving style than the sports set-up. The extra compliance means the traction control is less busy under acceleration on bumpy surfaces too. All this for £190 less…

A few days later KV08 was fixed. The cause of the problem? According to Mercedes it was all down to a piece of cloth – the little strip of dishcloth, not even a millimetre thick, that I had slipped between two arms in the roof mechanism that were knocking together annoyingly whenever I drove with the roof up. It seemed as harmless as putting a beer mat under the leg of a wonky pub table to me, but apparently it caused the linkage to come out of adjustment, which in turn prevented a one of the roof’s microswitches from triggering. Sounds like mighty fine tolerances to me, but if that’s what it was, that’s what it was.

At least the SLK is now back and in full working order. And, with the roof mechanism correctly aligned, it’s also rattle free with the top up. As we’re now getting to that time of year when the SLK’s hard-top should come into its own, that is very good news indeed.