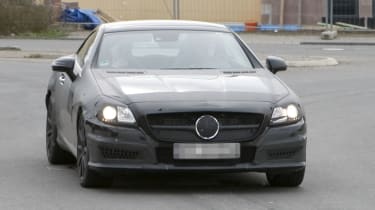 The new Mercedes-Benz SLK63 AMG has been spotted testing at the Nurburgring. Despite the heavy disguise, the clearly visible quad exhausts, cross-drilled brakes and bigger wheels appear to mark this test car out as a high performance AMG variant. Main speculation surrounding this hottest ever SLK has been about the powerplant. It seems most likely that Mercedes’ new twin-turbo 5.5-litre V8 will be used, but there are rumours that the company is developing a twin-turbo V6 that could be used in its smaller products. Whichever engine Mercedes chooses to use it should give the new SLK much more power than its predecessor, the 355bhp Mercedes SLK55 AMG. That forced induction V8 is capable of up to 540bhp, for instance. Due to go on sale next year, the Mercedes SLK63 AMG is expected to cost up to £60,000. That could make it around £10K more than a Porsche Boxster Spyder, but with considerably more power and luxury for your money.