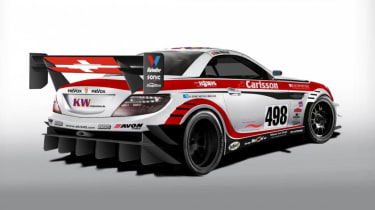 Thought the Mercedes SLK was one of the less hardcore roadsters on sale? This Carlsson version could rectify that. The Carlsson SLK 340 is designed for hill climbing, and looks set to tackle the Pikes Peak event in America. At its heart is a 3.4-litre V8 engine producing 602bhp and 317lb ft, making it nearly 200bhp healthier than the range-topping Mercedes SLK55 AMG though 81lb ft down on torque. The engine drives the rear wheels via a motorsport-spec Hewland gearbox with paddle shifters. More noteworthy than its shed load of power, though, is the SLK 340’s weight. A host of light materials – including a carbon bodykit – ensure it tips the scales at just 780kg, which compares extremely favourably to the 1690kg SLK55. It also endows the Carlsson car with a 784bhp/ton power-to-weight ratio – 130bhp higher than that of the world’s fastest car, the 268mph Bugatti Veyron Super Sport. There’s also a host of aerodynamic adornments, with a closed underbody, aggressive front splitter and decidedly unsubtle rear spoiler. There’s adjustable KW suspension, 18in BBS wheels (with Avon tyres) and a more race-ready brake setup. The interior gains its necessary rollcage as well as a pair of racing seats. All in all, it’s a welcome dose of muscle for the SLK and a hint of what a Black Series version would look like if AMG decided to crank the little roadster up a notch. Fingers firmly crossed… The Carlsson SLK 340 will debut at the 2013 Geneva motor show in March, before its motorsport career begins in the summer.