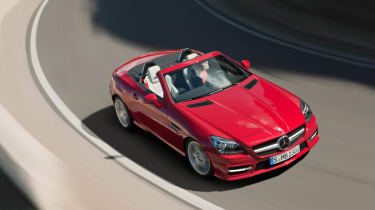 Mercedes-Benz has released the first official pictures of its new SLK. The third generation roadster is all-new, and arrives in the UK later in 2011 with smaller, more efficient engines. As with its predecessor, the new Mercedes-Benz SLK clearly draws inspiration from Stuttgart’s current flagship supercar. Gone is the pointed nose of the outgoing Mercedes SLR McLaren-mimicking SLK, replaced by influences of the new SLS AMG supercar. The oversized grille sits almost vertically upright and way ahead of the all-LED headlights, elongating the bonnet to make the front end of the SLK more powerful and dramatic.  Working rearwards, the SLK exchanges drama for subtlety, the tail lights a little inset from the bodywork to make the naturally bulky rear end seem smaller than it actually is. Powering the new SLK at launch is an all-petrol naturally aspirated line up. Buyers can choose from two 1.8-litre four-cylinder units, the 181bhp SLK200 or 201bhp SLK250. The more power hungry can also opt for the SLK350 with its 302bhp 3.5-litre V6, a brand new, from the ground up engine which boasts an identical power output to BMW’s 3.0-litre twin-turbo Z4 sDrive35i, an arch rival. All SLKs get Mercedes’ BlueEfficiency badge thanks to the employment of stop/start tech as standard, while the two most powerful engines get a seven-speed 7G-Tronic automatic gearbox as standard (it’s an option on the SLK200). With 7G equipped, the SLK200 is the most economical roadster in its segment, returning 46.3mpg, yet it still manages a 7.0sec 0-62mph time and 147mph top speed. The SLK250 returns 45.3mpg while hitting 62mph in 6.6sec and a 150mph top while the most powerful model, the SLK350, dashes to 62mph in just 5.6sec and is good for 155mph. Thanks to the new V6’s direct injection technology it will also return an impressive 39.7mpg, compared to its rival Z4’s 31.9mpg. Whilst this is the most powerful Mercedes SLK at launch, it should not be long before AMG shoehorns in a tune of its new 5.5-litre V8 to make a miniature SLS… Conventional steel suspension comes as standard, with a sports suspension option with harder springs and dampers to crank up the drivers' car credentials. This can then be further upgraded to the Dynamic Handling package that offers continuously adjustable dampers, speed sensitive steering and torque vectoring brakes. The latter sends more force to the rear brake on the inside of the bend, further stabilising the car. Inside, the cabin isn’t worlds apart from the outgoing SLK - the driver and passenger are buried deep inside the cockpit, separated by the silver centre console. However, the dash is now more geometric and is no longer darkened by an abundance of black plastic, whilst the four circular air vents not only mimic the Mercedes SLS but also hint at Mercedes models of the 1970s and ‘80s. Once again, the Mercedes SLK employs the use of a folding metal hard-top roof. This time, however, Merc offers it with the option of the newly developed ‘Magic Sky Control’. This not only introduces a panoramic glass roof to the roadster, but also allows drivers to switch between clear and blacked-out roof glass at the touch of a button. Standard models, however, will still be offered with a full metal roof. Other clever Mercedes tech available on the new SLK includes an Attention Assist drowsiness detection system, intelligent lighting and a speed limit assist system that alerts drivers to the maximum speed at their current location. The latest Mercedes SLK will hit UK showrooms in June 2011. Whilst prices and specifications have not yet been confirmed, it shouldn't deviate too far from the current SLK’s starting price, which is just shy of £31,000. That keeps it close to its key rivals, the BMW Z4, Audi TT and Nissan 370Z. Find out which of that lot we rate the most in our group test here.

The Mercedes SLS AMG takes on its supercar rivals