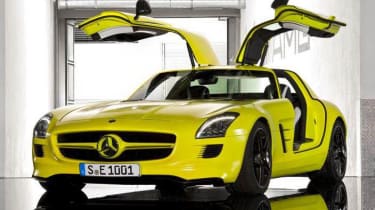 Mercedes has created a working prototype of the electric SLS AMG supercar. Called the E-Cell, it’s the concept of a car mooted shortly after the launch of the petrol-powered SLS. Presented in bright yellow - or ‘AMG Lumilectric Mango’ - the prototype uses lithium polymer batteries to provide the grunt, and an electric motor propelling each wheel to transmit it to the road.  Plug-in recharging and power recuperation will provide and maintain the power.   Despite the fairly obvious green credentials, the E-Cell won’t be found wanting for performance. Revolving at up to 12,000 rpm and transmitted to the wheels through reduction gearing, the motors push out the equivalent of 526bhp and 649lb ft of torque, giving up 37bhp to the petrol model, though taking back 170lb ft of torque.  This power translates to 0-60mph in just over 4sec - just behind the claimed 3.8sec of the petrol model. To accommodate the lithium polymer batteries, their locations have been split between the centre tunnel and behind the cockpit, positioned such that the centre of gravity is kept as low as possible.  The removal of the 6.2 litre V8 has also allowed AMG’s engineers to rework the aero of the SLS. A reshaped rear diffuser and extending front splitter has endowed the E-Cell with superior downforce compared to its petrol counterpart. Heat management of the batteries comes courtesy of integrated cooling units.      The motors themselves are paired and integrated into each axle, reducing the unsprung mass but also requiring replacement of the petrol version’s double wishbone suspension on the front axle.  It’s replaced by a multi-link setup accompanied by pushrod dampers.      The final production model of the E-Cell is expected to go on sale in 2013. Expect some evo driving impressions well in advance of that. See the Mercedes SLS AMG take on all its rivals in evo 146, on sale now