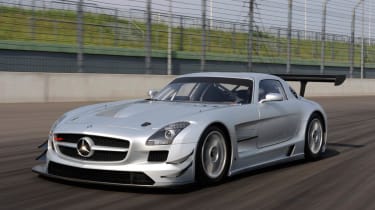 The video, shot at the Eurospeedway Lausitz in Germany, shows five-time DTM champion Bernd Schneider and German Porsche Carrera Cup champ Thomas Jager putting the new car through its paces and runs for just over twenty minutes, showing the SLS in full race spec, with both in-car and trackside action covered. It's worth a watch. The GT3 is wider and lower than the road car, with additional air intakes to dissipate heat and feed cold air to the oil cooler. The SLS gains flared arches to make room for larger racing wheels and tyres, while new side skirts have been designed help keep the rear brakes cool.  A larger carbonfibre wing dominates the SLS’s rear end, with additional venting to the arches.

Engine wise, the GT3 SLS is near identical to the 563bhp, 479lb ft road-going version, although a six-speed, sequential manual gearbox sees 0-60mph ticked off in a claimed 3.8sec, while Mercedes say the GT3 will exceed speeds of 180mph.

Inside there’s a high strength carbonfibre safety cell, combined with a steel roll cage, which adds protection and helps to reinforce the GT3’s aluminium spaceframe, while a 120-litre race fuel cell is tucked away behind the driver.

The SLS GT3 will cost about £350,000 with deliveries due for early 2011, while AMG’s Driving Academy is to offer training to interested customers.

Watch the video above, & click here for a Mercedes SLS GT3 image gallery