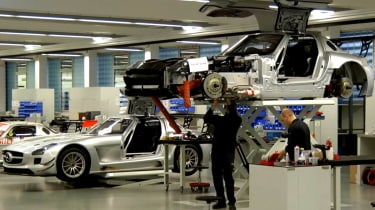 Mercedes has released the second installment of the video series covering the building of its SLS AMG GT3 racing car.  Powered by a virtually identical 6.2-litre V8 as the production car, the SLS AMG GT3 has a six-speed sequential gearbox, which helps yield a 0-60mph time of 3.7 seconds on the way to a 186mph top speed. Seemingly just as quick are the work force, who in this time-lapse clip install a number of components under the car, to the engine, front wings, bumper and bonnet.
Advertisement
Follow us on TwitterFollow us on FacebookEmail us
Advertisement
Advertisement
Advertisement