Mercedes-Benz has announced plans to launch the SLS AMG Coupé Electric Drive, with enough power to overshadow the V8. 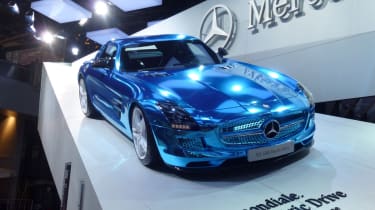 Mercedes-Benz has announced that it’s planning to launch the SLS AMG Electric Drive next year, after the car’s show debut at the Paris motor show. With 730bhp and 737lb ft, Mercedes claims the electric SLS is the most powerful production car it has ever offered.

Driven by four individual electric motors, two gearboxes and a new AMG Torque Dynamics system, the SLS Electric is four-wheel-drive, and is said to do 0-62mph in 3.9secs onto a limited 155mph.

Power comes from a liquid-cooled 60kWh, 548kg lithium-ion battery. It will take 20 hours to fully charge from a standard wall socket, or just three if you opt for the fast-charge wall box.

The SLS Electric shares its styling with the standard car, but the basic architecture has been lightened with the addition of a new carbon fibre and aluminium arrangement.

The front suspension has been completely redesigned to accommodate the four-wheel-drive layout, with the battery pack is mounted within the transmission tunnel and behind the passenger compartment of the SLS.

There’s a dynamic sound generator, known as the ‘AMG Drive Unit’ installed inside the car, which generates a range of noises when driving, as well as a process Mercedes calls ‘Sound Cleaning’ which reduces the apparent road and wind noise.

The drivetrain was developed in the UK by the Brixworth-based AMG High Performance Powertrains development team. The model will cost €416,500 in Germany, and will go on sale in June 2013.