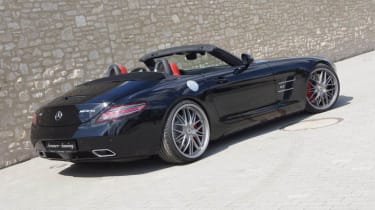 The Mercedes SLS AMG Roadster has been tuned to nearly 600bhp. German company Senner Tuning has boosted the SLS’s 6.2-litre V8 engine from 563 to 598bhp, while torque rises from 479lb ft to a Ferrari F12 and Lamborghini Aventador-matching 509lb ft. The extra power and torque is yielded by new high-flow air filters and a stainless steel, valve-control exhaust system. No performance figures have been revealed, but useful improvements over the standard SLS Roadster’s 3.7sec 0-60mph time and 197mph top speed ought to be expected. Senner’s work extends beyond the engine, too. There’s a set of adjustable KW coilover suspension plus 20in Schmidt Revolution alloy wheels which wear Kankook Ventus S1 Evo tyres. If you’ve got a Mercedes SLS Roadster you want tuning up, Senner will charge you 17,900 euros (around £15,250) while a fully converted car costs 236,850 euros (around £200,000, a £23,000 hike). Senner stretches back to 2002, and specialises mostly in German manufacturers, namely Audi, VW, BMW and Mercedes, though it also offers upgrades for Nissans, including modifications for the GT-R.