The new Mercedes SLS AMG Roadster loses the coupe's gullwing doors - but can it deliver a similarly focussed driving experience? 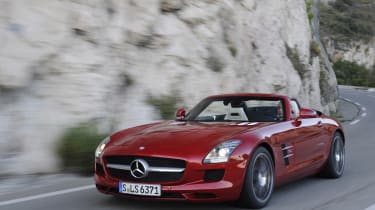 The £176,895 SLS AMG roadster is the new convertible version of the gull-wing AMG SLS coupe. Naturally, lopping the roof off means the distinctive (but controversial) doors of the coupe had to go and are replaced by a pair of conventionally hinged doors instead.

The first thing to be aware of is the drivetrain in this SLS roadster is identical to the SLS coupe in every way. This is excellent news, as the 571bhp V8 engine in the SLS is a cracker and delivers its ample power to the road via the rear mounted, seven-speed DSG gearbox, which is bolted directly to the front/mid positioned engine via a torque tube running down the centre of the car.

Losing the roof has only added an extra 40kg to the kerbweight (now 1660kg, including a 75kg driver and luggage), mainly because Mercedes chose to use a folding three-layer fabric roof, a much lighter solution than the folding metal roof used on the SL. This can be raised or lowered at speeds of up to 31mph, and operates in just 11 seconds.

AMG claims that minimal strengthening to the chassis was required to compensate for the lack of roof, as a roadster version of the SLS was planned from the start. Tweaks include thicker aluminium for the sills, a reinforcing cross-member under the dash and another brace positioned behind the seats. The end result is a torsional stiffness that’s almost identical to that of the SLS Coupe.

Very like the SLS coupe, unsurprisingly. If anything, it’s slightly better, thanks to the driver now being engulfed in the rousing soundtrack of one of the best

V8 engines ever produced by AMG.

Losing of the roof seems to have had zero effect on the driving dynamics too, in fact, the SLS roadster seems to display even less roll than the coupe through demanding direction changes, so I suspect the roll centre of the chassis is lower now the roof has gone. This helps keep turn-in super sharp - understeer never appears on the dynamic menu - and this agility makes the SLS a very different drive to the regular Mercedes SL.

AMG has also introduced optional electronically adjustable dampers on the roadster, with three settings, Comfort, Sport and Sport +, a system fitted to the test cars. It’s a worthwhile option as it does deliver a better ride than the standard, non-adjustable set-up.

The 571bhp, 6.2-litre engine produces oodles of torque from 1000rpm onwards, making this a very easy engine to live with in real world driving but when the opportunity presents itself, this engine delivers the goods in a spectacular way. There’s serious power on offer here, with the SLS capable of sprinting from 0-62mph in 3.8secs and going on to an electrically limited 197mph (the speed limit of the tyres).

The only fly in the ointment is the DSG gearbox sometimes struggles to keep up, not changing quite as quickly as you’d like, especially on downshifts. It hardly matters, as the engine has so much punch in every gear, so you can leave it in a higher gear and still make spectacular progress.

This is where it all starts to go wrong, as the SLS might only be £8500 more than the SLS Coupe but that still means it costs a whopping £176,895 and that’s before any options are added (there’s plenty to choose from, too).

The roadster will go on sale alongside the coupe, with AMG predicting the soft-top will account for 40 percent of sales. The roadster is expected to particularly popular in the US, but anyone seriously considering an SLS should look at one – it drives beautifully and the driving dynamics haven’t been effected by the loss of the roof, while at the same time it’s gained an off-the-scale soundtrack.

The SLS AMG Roadster is one of a new breed of supercars which deliver stunning performance, yet are incredibly easy to live with day to day. That’s an intriguing combination.