Mercedes has given the SLS some more power and firmer chassis settings, but is the GT a better driver's car? 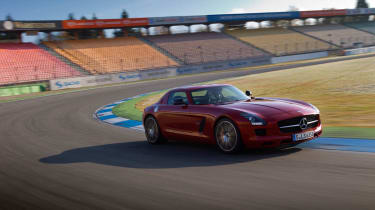 A slightly faster, slightly firmer and slightly more expensive version of the SLS coupe and roadster. Power gains are modest – the GT gets just 20bhp more than the ‘standard’ car – but it also benefits from reworked suspension and has revised gearbox software to speed up the double-clutch gearbox.

It will go on sale in the UK early in 2013, and although official pricing hasn’t been confirmed yet, we’re told it will carry a supplement of around £12,000 over the standard SLS, which Mercedes will sell alongside it. That means around £180,000 for the GT coupe and £189,000 for the GT roadster.

Mild revisions to the engine have boosted peak power to 583bhp with what are described as ‘dethrottling measures’, basically a revised intake manifold and a slightly more permissive ECU. Peak torque remains unchanged and the performance increase is nominal – the GT’s 3.7-sec 0-62mph time is only a tenth of a second quicker than the standard car. Top speed is electronically limited to 198mph.

Mercedes has listened to some of the criticism leveled at the leisurely shifts of the standard SLS with revised transmission software. Although the twin-clutch box itself is no quicker, AMG’s engineers have cut the response time of the electronic control system to reduce the time taken for change requests to be processed by ‘up to 60 percent.’

The GT’s suspension has been given a proper reworking – an indication of the direction we can expect the full-on SLS Black Series to take. Spring rates are 30 percent firmer front and rear, and the adaptive dampers are both stiffer and have lost the standard car’s ‘Comfort’ setting, leaving only a choice of ‘Sport’ and ‘Sport Plus’.

Despite the promise of all the mechanical changes, the GT feels surprisingly similar to the standard SLS. That’s no bad thing, of course, especially if you’re looking for something capable of combining supercar performance with everyday trickle-it-to-the-shops drivability. But just don’t expect a transformed dynamic experience.

As with the standard car, the GT is defined in large part by its remarkable engine. The 6.2-litre V8 lives for the red line, revving with sonorous enthusiasm towards its 7200rpm cut-off whenever its given its head. There’s not a huge amount of low-down torque, but there doesn’t need to be – this is a car that enjoys being worked hard.

The new gearbox software has definitely sharpened things up by reducing the time between pulling one of the behind-wheel paddles and feeling the new ratio arrive. That said, there’s still a slight but noticeable delay that the Ferrari 458 – which uses a version of the same transmission – just doesn’t have. And, as before, when it’s left in full auto mode the transmission does its thing as unobtrusively as a true slushmatic.

Like the standard SLS, the GT’s high-geared steering means that it feels dartier than it really is. Once you’ve dialled into the helm’s rapid responses you learn that this isn’t a car to throw at corners, rather one that rewards smoothness. Certainly on the chilly, damp German tarmac that we drove the GT Roadster on, smoothness was vital to helping the rear tyres find traction. Mercedes is rightly proud of the SLS’s everyday usability, but when its slippery underfoot it spends more time with the ESP light on than off.

We also got the chance to drive a GT Coupe on track at Hockenheim, where the chassis revisions felt more apparent. It turns in more enthusiastically than the standard car and, although grip levels were as low as they were on road, it was happier at being driven close to its limits than the sometimes snappy standard SLS.

Probably wisely, Mercedes refuses to discuss UK sales numbers for the SLS, but the number in the classifieds wearing both tiny mileages and vast savings suggest that the market hasn’t been exactly crying out for a more expensive edition. That said, the GT tweaks look like pretty decent value by the rarefied standards of SLS option pricing, and we’ve no doubt that most buyers will dig deeper for them.

Although officially unconfirmed, it’s near certain that the standard SLS will benefit from the same transmission software revisions, but Mercedes isn’t planning to follow McLaren’s lead by installing the update onto older cars free-of-charge.