Mini's new Clubvan has been revealed ahead of its launch at the Goodwood Festival of Speed. Images and details here 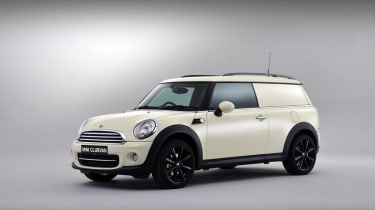 Ahead of its official launch at the Goodwood Festival of Speed, Mini has unveiled details and images of the new Clubvan – a two-seater commercial vehicle, based on the Mini Clubman, and based on the 1960s Morris Mini Van.

The concept was first seen at the 2012 Geneva motor show, and the Clubvan has now been confirmed for production, and will be priced from £11,175 excluding VAT – the all-important price for commercial buyers.

With a maximum load capacity of 860 litres, and payload capacity of 500kg, the Clubvan won’t be rivaling the Ford Transits of the world, but the ‘Premium’ commercial is designed to appeal to small premium businesses.

Mini has chosen to trim the load bay with high-quality materials, and the rear side windows are body-coloured and reinforced polycarbonate, with tinted rear windows.

The Clubvan will be offered with three different engines. The 97bhp 1.6-litre petrol for the £11,175 One, a more powerful 120bhp version of the same engine for the £12,475 Cooper, and a 110bhp diesel in the £13,600 Cooper D. All are fitted with a manual six-speed manual gearbox, with the option of an automatic for the Cooper D.