More practical Mini is the most powerful Clubman yet 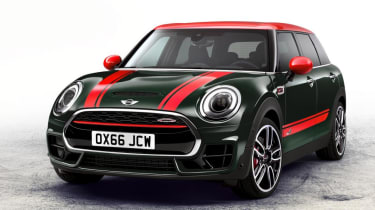 Say hello to Mini’s new John Cooper Works Clubman, the most powerful Clubman to date thanks to its 228bhp 2.0-litre turbocharged engine and 6.3sec 0-62mph time. Making its debut at the Paris Motor Show next week, the JCW Clubman is available to order now with prices starting from £29,345.

Joining the current JCW hatch and convertible models, the new Clubman has undergone the same upgrades including work to the TwinPower turbocharger, sports suspension, and brake system. Despite a top speed of 148mph the new JCW Clubman is a little off the pace of today’s hyper hatches.

The 2.0-litre engine is the same TwinPower single fitted to the other JCW models in the Mini line up. Over and above the regular Mini models it features a modified turbocharger made from an uprated heat resistant material and a larger intercooler. Turbo boost pressure is increased, the engine’s compression ratio lowered to 10.2:1 and JCW-specific pistons are also used. There is also an uprated cooling system with the fitment of a second cooling radiator installed behind the left-hand front wheel arch. A sports exhaust is the final performance modification, reducing backpressure and increasing the JCW’s dB rating. 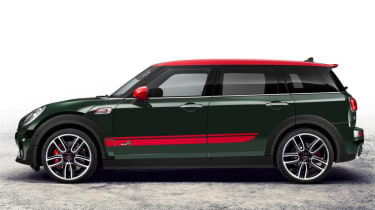 For the first time the JCW Clubman will only be available with Mini’s ALL4 all-wheel drive system, with either a standard six-speed manual gearbox or optional eight-speed Steptronic auto. Under normal driving conditions torque and power is sent to the front wheel with the DSC system detecting when drive needs to be sent to the rear axle via a electro-hydraulically controlled ‘hang-on’ clutch mounted on the rear axle.

In line with existing JCW models, the Clubman’s spring and damper rates have been revised to provide a firmer set-up but have also been further enhanced to take into account the Clubman’s longer wheelbase and weight distribution. Variable damper control is available as an option.

Four-piston Brembo callipers are fitted to the front axle of the JCW Clubman and 18-inch wheels are standard fit with 19s available as a cost option. Other visual clues to identifying the JCW Clubman include a bespoke front apron with additional brake cooling intakes in place of the standard Clubman’s fog lamps. 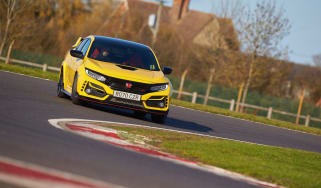 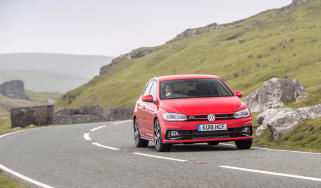 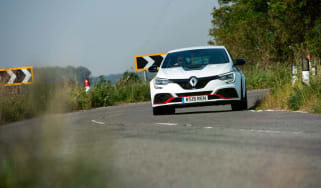