We're serial Mini owners here at evo, having bought and subsequently failed to sell our early Cooper Works (42,528 miles and counting) and our Hartge-tweaked Cooper S that's covered an equally impressive 45,000 or so miles in our hands. No surprise then that when the official John Cooper Works-tuned Cooper S was introduced we had to have one. But how would the fully-warranted factory-tweaked flagship compare with our earlier Mini adventures? Only time would tell. 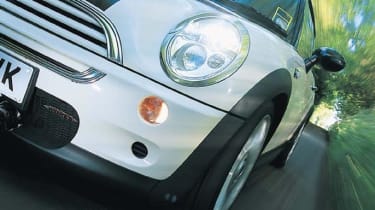 We're serial Mini owners here at evo, having bought and subsequently failed to sell our early Cooper Works (42,528 miles and counting) and our Hartge-tweaked Cooper S that's covered an equally impressive 45,000 or so miles in our hands. No surprise then that when the official John Cooper Works-tuned Cooper S was introduced we had to have one. But how would the fully-warranted factory-tweaked flagship compare with our earlier Mini adventures? Only time would tell.

Tales of £30k+ Minis abound, but when it came to speccing 'our' car we opted to shun fancy metallic paint, sat nav and sunroof in favour of a classic no-cost Pepper White with black roof and stripes scheme, together with the standard fit 16in rims.

Despite this attempt at abstinence, it rapidly became clear there's no such thing as a 'cheap' Mini, especially when you tick the box for the S Works engine upgrade, which retails at a knee-trembling £3000, not to mention the much-needed JCW leather sports seats, which put an £1180 hole in your budget. We also planned to try the JCW 18in rims when they became available, partly out of vanity and partly to see if they exacerbated the Mini's well-documented sensitivity to wheel and tyre combinations. At £1777 they were further proof of BMW's confidence in the boundless budgets and enthusiasm of top-end Mini customers.

We were immediately impressed with the performance gains delivered by the S Works kit. For the first few months there was a definite aura of specialness about RA53 KVK, at least amongst Mini-driving afficionados, all of whom seemed to clock the discreet 'John Cooper S Works' badging, heavily bolstered seats and beefier tailpipes from a mile off. If only they didn't insist on waving or flashing their headlights in approval.

Never short of pace, the S Works was one of those cars you always end up driving a little quicker than prudent in these camera-infested times. A quick squirt through second and third, followed by what soon became the regulation short-shift into fourth and sixth always saw the speedo needle settle at 90mph. While this made for rapid and relaxed motorway cruising, the tall gearing, coupled with the supercharged 1.6-litre engine's whiney note, always seemed to make the job of wringing the S Work's neck unnecessarily laborious, the ill-judged ratios and slightly soft throttle response robbing the Mini of the fizz and vigour so abundant in our current champion hatch, the Clio 182 Cup.

Despite the lanky gearing, the S Works was thirsty. No matter how gently we drove it, the mpg refused to get close to 30mpg. You'd be doing well to get 26mpg on a run, and a particularly frenzied assignment as chase car on an Exige/Noble/GT3 RS/Stradale group test saw the figure fall to 16mpg.

Hindsight's a wonderful thing, for dynamically the S Works was never better than when it arrived on its undersized 16in rims. Sweet, deft and supple, the added potency didn't seem to trouble the prodigious lateral and tractive limits of the chassis on dry roads, and although the ASR was busy when it rained, the quick steering had plenty of feel and the nose felt nicely keyed-in to the tarmac. The big rims undoubtedly added some range-topping 'bling', but on anything but a smooth, dry road, where the massive wheels and tyres generated immense road holding, the S Works was hobbled by poor high-speed wheel control, crashy low-speed ride and poor wet-road feel.

While we're talking bugbears, the optional Xenon headlights, while brighter than the standard items, suffered from being set too low, which defeats the object of the more intense beam. Oddments space was also at a premium: the door bins were rendered useless by the door grab handles. Disappointingly, despite looking the business, the JCW seats weren't comfortable over long distances, and proved annoying to live with day-to-day, as their width made it difficult to reach around to grab the seatbelt and their restricted tilt made it almost impossible to get people/bags/boxes etc into and out of the back seats.

That sounds like a big list, but none was serious enough to turn me against the car. Perhaps most disappointingly the worst niggles were direct results of succumbing to the charms of the JCW seats and wheels. In essence, then, the S Works was a great 12-month partner, a fact underlined by the too-good-to-be-true TLC servicing package (£100 when you buy the car, then free servicing and recovery for three years) and our exceptionally efficient local dealership, Wollaston Mini.

Now that it's gone, I miss the Mini's combination of everyday practicality and genuine giant-slaying speed. I also miss its agility and dry road grip, and yes, it was pretty cool to have the ultimate factory model during what I'm sure we'll look back on as the peak of the Mini's popularity. But, despite it all, I never formed an emotional bond with the car. The capability, reliability, durability and impeccable dealer service elevate the ownership experience, but for heart-on-sleeve dynamism you might find the Mini a bit too cool for its own good.