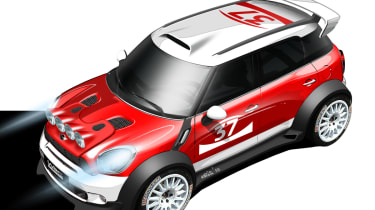 Mini is entering the World Rally Championship in 2011 with the new Countryman SUV. Mini says the Countryman is a great base for a competitive racing car and is a confirmed contender for next year’s WRC. Prodrive has been tasked with its development; the same Banbury outfit behind the Subaru rally campaign until its withdrawal from the sport in 2008. The Countryman WRC car is designed to enter the new Super 2000 regulation championship which stipulates the use of 1.6-litre turbocharged engines, four-wheel drive and an increased emphasis on a road car relationship, helping to reduce cost. In this case a BMW Motorsport-developed engine will be producing the steam.  Mini will campaign in selected 2011 events with customer orders already taken, a full 2012 WRC season will follow with involvement expected for several years. The Countryman will do battle with the S2000 Ford Fiesta, Skoda Fabia, Peugeot 207 and more, with rumours linking Markus Gronholm to a seat. Kris Meeke is also said to have been in discussions with BMW for a drive, which could make for a nice British driver and car setup, if you can ignore Mini’s ownership and focus on its heritage… BMW board member Ian Robertson said ‘Mini customers have always shown great interest in Motorsport. I am convinced we will add a few more chapters to our success story in rallying.’ Mini captured the imagination of WRC fans back in the 1960s with the original Cooper S by taking the fight to the big powered Fords and winning the 4000km Monte Carlo rally. A great rallying name returning to the sport is spiffing news and for added nostalgia, strong rumours suggest the Countryman will make its debut at Monte Carlo.

Click here for our road test of the new Mini Countryman