The Mini Countryman has been facelifted for the 2014 model year, with a power boost for the Cooper S model. Details and pictures here 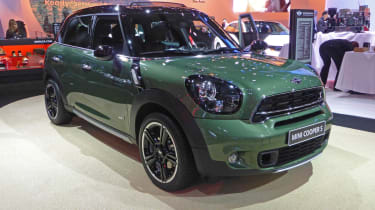 Mini has revealed an updated version of the Countryman, which sees a number of changes brought to the popular compact crossover model. The model, which has so far sold over 350,000 units worldwide, gets Euro 6 emissions compliance, a number of visual changes and a power hike to 187bhp for the Cooper S model.

External differences include a more rugged-looking bodykit for the four-wheel drive ‘All4’ models and a new-look lower grille in the front bumper – in line with that of the latest-generation Mini hatchback. A new addition is the option of Piano Black trim on the headlight and tail lamp surrounds on higher-spec models.

Cooper and Cooper D models are now fitted with lightweight 16-inch alloy wheels, and the 17-inch wheels on the S and SD are also said to be considerably lighter than the old designs. All models from the Cooper and above also get new LED fog and running lights.

Mechanical changes are minor, with the main emphasis on the range’s new Euro 6 emissions compliance. Having just been revealed at the New York motor show, the updated Countryman models are scheduled to go on sale in the UK this Summer.