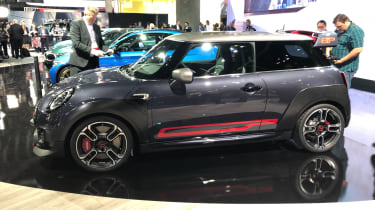 The Mini GP is back in its third iteration, following the template of its predecessors in offering a lighter, harder and more focused limited-run package. First revealed in concept form at the 2017 Frankfurt motor show, and since spied multiple times in pre-production testing, Mini has finally officially revealed its most powerful model yet.

The powertrain is based around the same underlying B48 2-litre turbocharged four-cylinder petrol engine as found in the standard Cooper S and JCW, but with a collection of detail changes that substantially build on the figures of the standard Mini John Cooper Works. New for the GP is a larger twin-scroll turbocharger, running on a lower compression ratio with new high-flow injectors. Mini’s (or rather BMW’s) Valvetronic variable valve timing and Double Vanos systems are also standard.

The result is some pretty substantial gains in performance, with a peak power figure of 302bhp available between 5000 and 6250rpm, a hefty 72bhp more than in the standard Mini JCW. Torque is also up, with a plateau of 332lb ft from 1750 to 5000rpm. Power is sent to the front wheels via a mechanical limited-slip differential, but the new GP will not be available with a manual gearbox, rather an eight-speed torque-converter automatic. Although immediately disappointing for those with a natural inclination towards their hot hatchbacks offering three pedals, Mini has developed a GP-specific software upgrade designed to sharpen downshifts and allow for multiple downshifts on kickdown. Also bespoke to the GP is a set of 3D-printed paddles mounted to the steering wheel that are larger and follow a 3D-printed theme throughout the car.

As a result of the powertrain upgrades, the new Mini JCW GP will hit 62mph in just 5.2sec, the fastest time yet in a production Mini, and go on to an unlimited top speed of 164mph. That 0-62mph figure is nearly a full second quicker than the standard Mini JCW manages when fitted with the same automatic transmission. 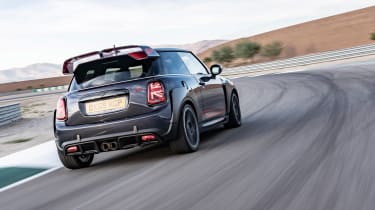 The chassis has also picked up some considerable upgrades, Mini having widened the track front and rear by 40mm, and lowered the body by a further 10mm compared with standard JCW models. Suspension all-round is typical Mini, with an independent rear suspension design, but now incorporating stiffer rubber bushings, lower springs and bespoke passive dampers. The front axle also features new swivel bearings that increase camber angle, while stiffer GP-specific engine mounts and bushings improve control at the front axle. The iconic rear bar has also made a comeback, replacing the rear seats like in GPs before.

One of the Mini GP’s most obvious aesthetic features is the return of its distinctive four-spoke alloy wheels, which are now 18 inches in diameter and forged to reduce unsprung weight. Behind the front wheels sits a set of 360mm brake discs, gripped by four-pot calipers. New for this GP are its floating wheelarch extensions made from carbonfibre, which complement the big colour-coded front splitter, rear spoiler and new diffuser, while detail aesthetic changes, such as the removal of chrome elements from inside the LED headlights and new mirror caps only emphasise how much detail effort has gone into this GP.

Although it has lost its rear seats and some level of sound insulation, the interior is not quite the stripped-out affair of previous GPs. The steering wheel and front seats are bespoke to the GP, so too the 3D-printed passenger-side clip-on trim that displays the build number of that specific car. A new highlight is the adoption of the digital driver’s display first revealed in the Mini-e, which looks far more sophisticated than the standard Mini’s analogue set-up and its almost apologetic rev counter. 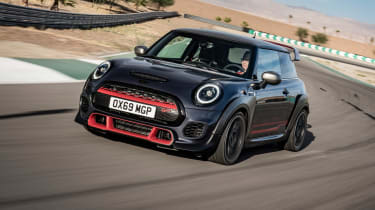 It can’t be ignored that our relationship with the current third-gen Mini has been a strained one. It’s too much BMW and not enough Mini, comfortable and refined, yes, but also uninspiring and inert compared to the excellent R53 and R56 that came before. Look at the GP with a cynical eye and you might also notice its power and torque figures are identical to those of the M135i, and that its 40mm wider track is also found on the Clubman estate, but rather than see this as a parts bin special, the stance, aggression and detail upgrades deep inside the chassis point to this being more than the sum of its (borrowed) parts.

The GP will reach customers in March next year in a 3000-unit build run (1000 more than previous iterations), with 575 of those coming to the UK. The GP is available for pre-order now from £33,895, a figure that’s actually quite reasonable considering the work that’s gone into it. In an era of £72k Renaults and £50k A-classes, the JCW GP might just be the third-generation new Mini that finally lives up to its ‘Go-Kart feel’ mantra.