First impressions of Mini's fastest ever car, the mk2 John Cooper Works GP hot hatch, as we drive it on track 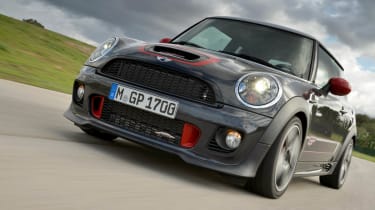 What is it? The new Mini John Cooper Works GP. It’s the second Mini GP, aping its 2006 predecessor with a grey and red colour scheme, 2000-strong production run and hardcore nature. Hitting 150mph, it's the fastest ever Mini, but it heads into the hot hatchback market wearing a plump £28,790 price tag – a sizeable £6000 more than a regular JCW. Technical highlights? There are sizeable changes over a JCW too, though, with completely new suspension and brake components. The GP is 20mm lower at the front than a JCW, 15mm at the rear, while adjustable coilover suspension can tweak this further. A new brake setup at the front comprises six-piston calipers and 330mm vented discs.  The tyres are completely bespoke, those four-spoke alloys – seemingly a GP trademark – measuring half an inch wider than normal, so the specially developed Kumho Ecstas they’re wrapped in can’t be transferred to lowlier Minis. The electronic differential gets a different setup and the front camber is increased to accommodate the new rubber. The steering remains the same, while the engine is simply a normal Cooper Works 1.6-litre turbo four with an ECU tweak taking it from 208 to 215bhp, maximum torque remaining the same at 206lb ft. As with its predecessor, back seats are binned in favour of a strut brace, while its bold diffuser and spoiler contribute to a 90 per cent reduction in rear lift. What’s it like to drive? We were limited to half a dozen laps of Mallorca’s Renn Arena circuit (so no road driving), a move reflecting the second-gen GP’s track-focused nature. It’s a fun and complex circuit, and allowed more than ample opportunity to suss out where the GP’s strengths lie. It’s much better on track than a regular JCW. It’s far less understeer-prone, and while the front will still inevitably wash wide if you push too hard, a new intermediate stability control mode – dubbed ‘GP’ – doesn’t limit power in such situations, so you can pull yourself out of the corner and investigate the limits of grip with no frustrating interruptions. You can also turn the whole system off. Do this and the GP is far friendlier than a base Works, which can be somewhat clumsy and unpredictable at its limits. Grip is lost progressively, so the snap to scrappy oversteer has gone and the Mini is a much smoother car during committed cornering. The steering is a let-down though; press the Mini’s infamous sport button for the keenest throttle response and the steering gains gloopy, unnatural weight, which is unnecessary on track, where you just want a quick, precise rack. The engine is as strong and keen to rev as ever; the GP perhaps feels quicker than a regular Works, but with its 0-62mph time just 0.2sec quicker, straight-line pace isn’t dramatically better. The soundtrack is a mix of mechanical roar and turbo hisses; not as characterful as the old supercharged GP, but fun nonetheless. And the brakes deserve credit – strong and confidence inspiring throughout our session. How does it compare? Six grand is a huge chunk of cash over an already pricey (and fun) John Cooper Works, but on this brief first acquaintance, the GP feels worth the cash if you plan to go near a circuit. You can easily add £6000 to a Mini with some innocent options box ticking anyway, and we value a set of new springs and dampers more than we do a ‘Media Pack’ and some bonnet stripes. Anything else I need to know? Needless to say, we can’t give a definitive verdict until we’ve driven the GP on road. The changes that make it a team player on a trackday could well make it unbearably harsh on a badly surfaced B-road. We’ll let you know after a full first drive in January.