It's a Mini by Rolls Royce: The Mini Inspired by Goodwood gets 181bhp Cooper S power and an abundance of leather and wood 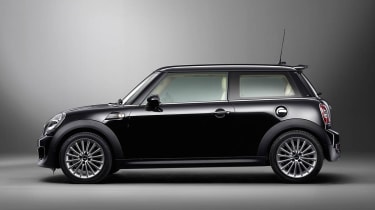 Mini has announced a new limited edition, the Inspired by Goodwood, which has been designed in part by Rolls-Royce and will be limited to 1000 units. Due to be unveiled to the public at the 2011 Shanghai motor show at the end of April, the new car has many features that will be familiar to anyone who has spent time in a modern Rolls-Royce. Much of the interior including the dash top, door linings and seats are finished in leathers and woods that are exclusive to Rolls-Royce and are manufactured at its Goodwood factory. Other parts borrowed from Rolls-Royce are the cashmere that lines the roof, sun visors and rear storage tray, the deep-pile lambswool floor mats and the Diamond Black exterior metallic paint. Also standard on the car are 17in multi-spoke alloys, adaptive xenon headlights, park distance control, automatic air conditioning and Harman Kardon speakers. There are ‘Mini Inspired by Goodwood’ badges all over and a ‘One of 1000’ badge which indicates the cars limited run. It is powered by the 181bhp/177lb ft turbocharged 1.6-litre petrol engine from the Cooper S, taking the Goodwood from 0-62mph in 7.0sec while its claimed fuel economy figure is 48.7mpg (combined). It can be specified with a six-speed manual or auto. The Goodwood is designed to feed the growing demand for small premium cars amongst Chinese buyers and, in particular, Minis, due to their British characteristics.  It goes on sale in spring 2012, with prices yet to be announced. But with a smaller and significantly less powerful Aston Martin Cygnet city car launching at £39,995, we expect a Mini with Rolls-Royce luxury to top £50,000. The most expensive Mini so far has been the £33K Mini JCW WC50 performance hatch. Another new special edition is the more affordable Mini Clubman Hampton, which features bespoke metallic blue paint, with silver or black alloys featuring red trim. On the inside there are black leather seats and automatic climate control. The Hampton is on sale now, available in Cooper and Cooper S guises.  Also on show at Shanghai will be the new Rocketman concept and the new Mini Yours portfolio that offers buyers in Asia the chance to configure and personalise their cars like never before. The Inspired by Goodwood and Hampton build on a long tradition of special edition Minis including the Park Lane, Checkmate, Convertible Sidewalk, Ritz, Piccadilly, Paul Smith and more recently the Camden and Mayfair that all traded on the Mini’s reputation for style and popularity.