Aston Martin has stopped production of its Cygnet supermini, after just two years. 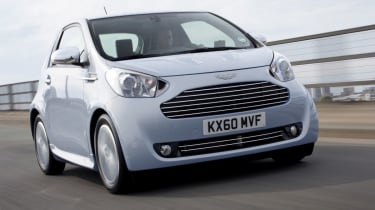 After just over two years of production, Aston Martin has confirmed that it has stopped production of the Cygnet city car. The main aim of the Cygnet was to reduce the company’s average CO2 emissions, based on the titchy Toyota iQ.

It was a big departure from the V12 supercars and continent-crushing GTs we were used to from Aston, and the controversy it caused among car enthusiasts reflected this.

Each Cygnet was the focus of 100 hours of ‘handcrafting’ at Aston Martin’s Gaydon facility, with work centring around producing a more luxurious interior (complete with its own five-piece luggage set in the launch cars) and ‘Astoning’ up the exterior, with styling flourishes from the company’s sports cars, including the more dramatic grille, some faux bonnet vents and diamond turned alloy wheels.

Rather than being designed as a sales-grabbing supermini to rival the Mini Cooper, Fiat 500 et al, it was effectively an optional extra to select when buying an Aston Martin coupe, saloon or roadster, to serve as a second car. The Cygnet could also be bought individually through a dealership, and there are reportedly a few new cars in the dealer network if you want one.

A standard Cygnet would have retailed at £30,995 with some special editions topping £39,995, almost three times as much as an equivalent top of the range iQ, which weighs in at £13,995.