New auto option is a bit too eager to please 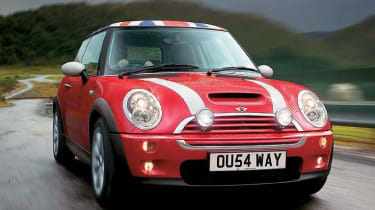 This may sound like a tautology, but if you like Minis and you like automatics then you'll like the Mini Cooper S Auto. Let me explain. For most people, driving a Mini without a manual would be anathema to the whole spirit of the car. BMW has realised this and gone out of its way to make an auto which, unlike the CVT system of old, doesn't dampen the spirit of the Mini. As a result it's quite a shock when you first slip it into Drive, expecting to be mollycoddled along by the torque converter. The six-speed 'box is incredibly eager to kick-down, seemingly always ready to exploit to the maximum even the merest hint of enthusiastic accelerator pressure. If you actually hit the switch at the end of the throttle-pedal travel then it becomes a case of 'how low can you go?' Down from sixth to second was its best effort. Likewise, if the ECU even suspects that you're pushing on, it will hold tenaciously onto each gear right through the rev range. In short, it's a bit like having a puppy with boundless energy that wants to play the whole time; quite endearing, but tiring after prolonged exposure. As a consequence you actually start reverting to manual mode just for a bit of respite. You can move the gearstick back and forth, but the paddles are more fun. Two 'ears' protrude each side of the centre boss, either of which you push with a thumb for a lower gear. Similarly, to change up you can tweak the right or left flap on the back of the appropriate spoke. Driven as it demands, the gears slam home satisfyingly with every tug or prod, although a little heeling and toeing does help on the downshifts. You actually end up using the manual mode almost exclusively, as it not only allows you to cruise in a higher gear, but also leaves you more reassuringly in control when driving hard. Which tells you all you really need to know. If you've always hankered after the fun, adventure-seeking nature of the Mini, but unfortunately have an incurable phobia of cars with three pedals, then a Mini Cooper S with the £1050 auto option is resoundingly for you. For those able to cope with a manual, however, a Mini automatic will always feel good, but a bit wrong. It's just not that sort of car.