Nearly 14,000 miles in, the Cooper S still feels as fresh as the day it arrived 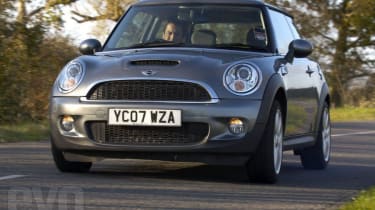 It’s been interesting driving the Mini on its new, non-runflat Vredestein winter tyres. As you’d probably expect, the ride is improved, but not by quite the margin I’d hoped. It’s still a very firm chassis on nasty urban roads and bounces over speed humps uncomfortably. Having said that, at speed the ride is better, and the Mini’s ability across a tricky and unpredictable road is heightened still further. Ultimate grip is down but you can use what’s left more effectively and without fear of being thrown off-line mid-corner by ragged tarmac.

Nearly 14,000 miles in, the Cooper S still feels as fresh as the day it arrived – which, to be honest, isn’t quite fresh enough. The rattle that plagued the S from new was traced to the ventilation system behind the glovebox. Wollaston Mini in Northampton replaced the relevant parts, but within a week or so the rattle returned. It’s not as bad as before but it’s still annoying.

Incredibly, with the S about to go, that solitary trip to the dealer could be my only contact with the Mini aftersales experience. The intelligent service schedule is predicting that the S won’t need attention for another 9000 miles! Cheap cars to run, these Minis…