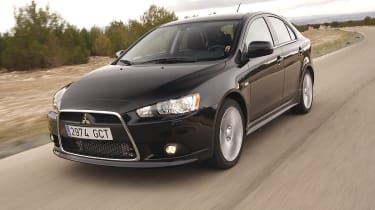 A junior Evo X? That’s the obvious first thought on encountering the Lancer Ralliart, whose prey-sniffing snout and multi-vented bonnet are almost exactly those of its evil sibling. The cabin is an Evo clone, too. But then you notice it lacks the bulged-out wheelarches, and that it has – yes – a hatchback.

It is, in fact, the Ralliart Sportback, the only form in which this four-wheel-drive, but Active Yaw Control-less, machine will be sold in the UK. That’s partly to distance it from the Evo, and partly to align it with obvious rivals such as the Focus ST, Impreza WRX and Golf GTI.

Here, Mitsubishi’s 2-litre ‘world engine’ (it’s also used by Hyundai and Chrysler) is in 237bhp tune. For the UK it’s matched exclusively to the SST double-clutch transmission, and on paper the whole thing seems a very attractive package at around £21,500. Especially as 62mph should be reachable after a brisk seven seconds.

Pause for thought. Perhaps seven seconds isn’t quite so great, given the getaway advantage of four-wheel drive. Cue doubt. The problem is that the Ralliart is a heavy machine, what with all that transmission, and the SST transmission has an annoyingly tardy getaway.

All would be forgiven were the Ralliart a rousing drive, but for all its claimed power the engine never really lets rip. You find yourself revving it to death to goad it along, easily done given the strange shortness of the intermediate gear ratios, and it’s much harder work than a torquey turbomotor should be. It sounds nondescript, too.

But it will all come good in the corners, yes? No. This Lancer really misses its tougher brother’s AYC and the resultant favourable torque distribution to each rear wheel. There’ll be no lovely powerslides here; go too quickly into a tight bend and it understeers like the nose-heavy car it is.

There’s promise here, though, and these were pre-production cars with calibration still tweakable. Get to it, chaps.