It's a measure of the FQ-340's head-spinning grunt that everyone who drives it barely mentions the grip or the lightning turn-in. As they hand back the keys the standard response is a quiet, incisive, 'it's f**king fast, that'. And it is. But to find out just how quick the Evo really is, I headed to Santa Pod on one of their regular 'Run What Ya Brung' days. 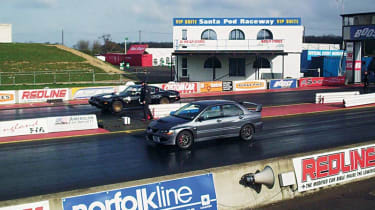 It's a measure of the FQ-340's head-spinning grunt that everyone who drives it barely mentions the grip or the lightning turn-in. As they hand back the keys the standard response is a quiet, incisive, 'it's f**king fast, that'. And it is. But to find out just how quick the Evo really is, I headed to Santa Pod on one of their regular 'Run What Ya Brung' days.

Now, for my sins, my brothers are both heavily into American cars. Not sure how it happened, but they'd choose US muscle over German precision or Japanese tech every time. And I reckoned that the 'Pod would be the perfect place for the little 2-litre turbo to engage in a spot of mega-displacement V8 ass-kicking. Lining up beside me would be a decidedly non-standard 1980 Trans Am fitted with a tweaked-up small-block Chevy engine.

The journey across country to Santa Pod rather knocked the stuffing out of two misguided elder Bovingdons, the Evo warping into the distance on the straights and through the corners. But when you're lined up with the 'Christmas tree' lights just ahead and an arrow-straight stretch of raceway disappearing into the distance, nothing seems certain.

As we're the first runners of the day (it pays to get there early as by lunchtime the queue nearly matches the length of the actual strip) the track is hopelessly slippery, but with a gentle launch the Evo flares momentarily into wheelspin and then starts eating up the quarter-mile course in a series of manic lunges. In my mirrors as I cross the finishing line, the small, smoking silhouette of a Trans Am flounders about half-way up the strip. With the track still 'green' it seems four-wheel drive is better than two; the TA is still spinning-up its rears as it crosses the finishing line. Round 1 to the Evo with a decent but far from perfect 13.5-second pass.

Next time I'm a little more brutal with the clutch but can't quite bring myself to execute the full road-tester launch (we tried that with the FQ-400 not so long ago and it went back to Mitsubishi with a remodelled transmission). Even so, it hooks-up perfectly and scorches to a 13.2-second finish. If I hadn't hit the limiter going from 2nd to 3rd, surely a sub-13-second pass was on the cards?

One more go, then: 5000rpm on the dial, pull up the clutch smartly and try to avoid that tenth-robbing limiter. Maybe I'm a bit conservative with the changes but the Evo just cracks the 13-second barrier with a 12.9 run, crossing the line at just over 104mph. The TA isn't quite in the same league but posts a respectable 14.3-second finish. The Racelogic VBOX reveals that the Evo has hit 60mph in 4.5 seconds and 100mph in a very serious 11.7sec en route, and I'm confident that there's more to come. But with the clutch and gearbox still in one piece and the queue starting to snake as far as the eye can see, we call it a day.

Oh, and that graunching noise was finally traced to a faulty front wheel bearing and air trapped in the AYC diff. And yes, it's had another service and another set of tyres; this time we've opted for the seriously trick (and bloody noisy) Yokohama AO48s, just like the ones fitted to Dickie's Exige. Another expensive month, but at least we can now conclusively report that yep, it's f**king quick.