Mitsubishi reckons it's found a new market niche. We go for an early drive 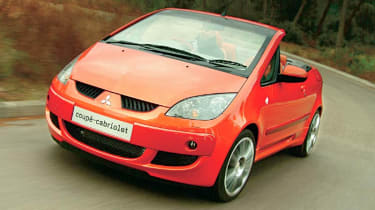 You normally associate superminis that have folding hardtops with hairdressers rather than driving enthusiasts. Mitsubishi hopes to change that. By taking the 1.5-litre turbo motor from the recently launched CZT hot hatch and sticking it in a car with a folding roof, the Japanese firm believes it can steal a march on rivals like Peugeot. Unless the French maker rushes out a GTI version of its top-selling 206 CC or Vauxhall turbocharges the Tigra, when the Colt is launched next April it will be the only supermini that combines open- top motoring and hard-top security with proper performance. To ensure that the coupe-cabriolet - Mitsubishi hasn't badged it yet - is financially viable, there's a 70 per cent component carry-over from the three-door CZT, while the platform is taken from the longer five-door. This allows the folding hard roof to be accommodated, a packaging conundrum that causes so much head scratching among engineers that they admit to designing cars like this from the boot forwards. Although the roof vanishes into the luggage compartment, the designers have purposely left a gap between the back of the rear seats and the beginning of the boot lid. This makes the rear deck look shorter than it really is and helps ensure that the back end doesn't overpower the stubby MPV-like nose. The net result is a slightly aggressive cab-forward look which, along with the deep chin spoiler, angled headlamps and stylish 14-spoke alloys, prevent the coupe-cab from looking too cutesy. Inside it borrows the controls from the hatchback and is thoughtfully laid out with some quality touches. Plastics, for example, get a tasteful silvery finish while the gearknob and steering wheel are both wrapped in leather that's the same colour as the paintwork. Mitsubishi's designers say they're also looking into ways of colour coding the centre console so that when the interior lights go on it also matches the exterior colour. Unlike Vauxhall with its two-seater Tigra, Mitsubishi's bosses are adamant that rear seats are the way forward because it makes the car more versatile and gives owners a bit more in-car storage. But space in them is so tight that they are only for occasional use. The backrest is uncomfortably vertical and getting any leg room at all robs the front seat passengers of space. Not that that will trouble under-tens. On the road, the C-C is very civilised with the roof down, thanks in part to the windscreen being extended a further 24mm rearwards than that of the hatch. The effect is two-fold: not only does this help reduce buffeting in the cockpit, it also means that there's less roof to hide in the tight confines of the boot, where every millimetre counts. One thing Mitsubishi hasn't been able to get round is the unavoidable increase in weight in transformation from hatch to convertible. The additional body strengthening and roof mechanism mean that the C-C tips the scales a not insubstantial 120kg more than the CZT. Mitsubishi is adamant that the C-C will still handle as much like the hatch as possible. And bearing in mind that the three-door is one of the lighter vehicles among its peers, the C-C should comfortably be the quickest of its kind in the zero to 60mph dash. Although we couldn't give the engine a full workout on our early drive, the 147bhp motor is a refined, lively unit and its reflexes don't seem to have been dulled by the extra weight. As in the CZT, the turbo works in a discreet manner but there's still plenty of grunt on tap and only a tiny delay as the turbo spins into action. Handling, however, is less sporting than you'd expect from a car that looks like this. The suspension does a fine job at insulating occupants from bumps and bangs, but in corners the steering is on the dead side and feels too vague to make the C-C a true enthusiasts' car. Mitsubishi says that there is still some chassis work to be done, so let's hope they've got to grips with it by the time the car gets to the market. Although the hot version we tested will be joined by a normally aspirated 1.5-litre and turbo-diesel variants, the 1.5 turbo will be the one to have. It's not perfect by any stretch of the imagination but as the first supermini coupe-cabriolet to be aimed specifically at keen drivers, it's a decent start. And its distinctive looks alone should put the Colt firmly back on the map.