650bhp, carbonfibre-bodied Noble M600 supercar will be built in the UK 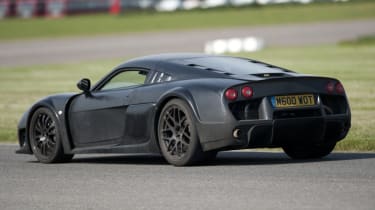 The long-awaited Noble supercar, the 650bhp M600, will finally be launched in late August, the Leicestershire-based company has revealed. MD Peter Boutwood told evo that the first pre-production prototype has been accumulating miles in the UK in readiness for sign-off, something our exclusive shots of the car undergoing high-speed testing at the Bruntingthorpe Proving Ground confirm.

The mid-engined, carbonfibre-bodied supercar evolved from the stillborn M15 but, according to Noble, nothing of that original car has made it through to production. ‘There is nothing quite like it on the market,’ said Boutwood, who remained tight-lipped on what the car’s price will be. ‘It’s more of an analogue car than a digital one. It’s a car for the purists.’

The enormous power output from the bespoke, longitudinally mounted, bi-turbo V8, and an anticipated kerb weight of just 1275kg, give a genuine supercar-level power-to-weight ratio of over 500bhp per ton, yet Boutwood claims that the car is easy to drive, flattering the driver. ‘We’ve concentrated on getting the basics right,’ he said. ‘It’s all about the handling and chassis with a Noble.’

The target is still to build one car per week, though Boutwood says that it will be a little while before the hand-built M600 is being produced at that rate. Even now, exactly where the new Noble will be built is yet to be decided, but it will be in the UK. ‘We want it to be a British car built in England,’ said Boutwood.

There is a numbered waiting list of around 70 people who left the small deposit they placed for the M15 with the company and they will get first option on the M600.