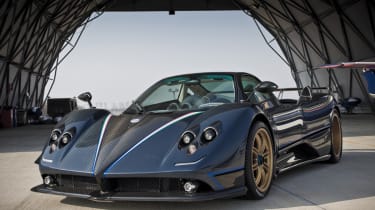 Pagani has just released photographs of this very special, one-off Zonda. It’s been built to celebrate the 50th anniversary of the Italian equivalent of the British Red Arrows Display team, known as the ‘Frecce Tricolori’.  This Zonda Tricolore is based on the Zonda Cinque coupe, using the same special carbonfibre weaved with titanium wire for the construction of its tub, and an automated paddle-shift gearbox. The exterior of the Tricolore is in bare carbon, finished off with a clear blue lacquer coating. The Tricolore differs from the Zonda Cinque by not having the air-intake snorkel fitted to feed the engine with air – instead there’s a small, vertical fin on top of the engine cover, presumably to help link the looks of the Zonda Tricolore to the jet used by the Frecce Tricolori team. There are also unique LED running lights at the front, shaped to look like the tail fin of a plane and ‘Frecce Tricori’ mimicking strips, beginning either side of the nose of the car and then running the full the length of the car. Pagani will be giving the Tricolore its world debut at the Geneva show next week and confirm this is a one-off model, with no other examples planned. It is priced at 1.3M Euros (plus tax), making it £1,340,000 delivered here in the UK. Ouch. Click here for the rest of the new from this year’s Geneva show Evo pits the Zonda against Bugatti Veyron, Carrera GT and Enzo