Ferrari takes a swipe at the state of F1, Max Moseley and the new teams for 2010 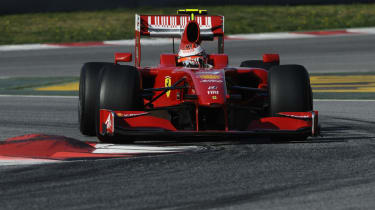 Ferrari have gone on the offensive over the state of the F1 on their official website, with an extraordinary outburst that describes the situation as a ‘holy war waged by the former FIA president.’  It’s perhaps not a surprise to discover how they feel about this, but it’s a surprise to hear it from the horse’s mouth. The new USF1 team come in for a kicking, as according to Ferrari.com they ‘appear to have gone into hiding in Charlotte, North Carolina’ and yet ‘Amazingly, they still have the impudence to claim that everything is hunky-dory under the starry stripy sky.’ From there they went on to attack a team hat as yet does not have an F1 entry. Stefan GP have bought the 2010 engines and chassis from the defunct Toyota set up ands are hoping to secure a slot if one of the new teams drops out. This is not a situation Ferrari is too impressed with:  ‘Next, we have the Serbian vultures. Firstly, they launched themselves into a quixotic legal battle with the FIA, then they picked the bones of Toyota on its death bed.‘ The main target of the vitriol however is Moseley, who they squarely lay the blame at. ‘Two teams will limp into the start of the championship,’ they say. ‘a third is being pushed into the ring by an invisible hand and, as for the fourth, well, you would do better to call on Missing Persons to locate it. In the meantime, we have lost two constructors along the way, in the shape of BMW and Toyota, while at Renault, there’s not much left other than the name. Was it all worth it?’

For the full transcript check out Roger Green’s latest blog here and tell us what you think.