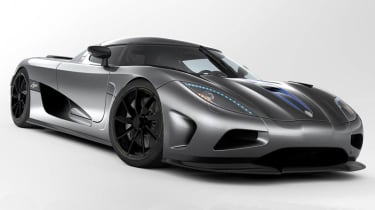 Koenigsegg is taking a brand new supercar to the Geneva motor show. This is the Agera, and while its design clearly owes a lot to the outgoing (and now 15-year-old) CC, it’s purportedly an all-new car. The company’s 4.7-litre V8 gets a twin-turbo makeover, with a rather monstrous 898bhp and 811lb ft the result. While the power comes in at a typically supercar-like 7250rpm, 738lb ft of torque is available from a much more accessible 2680rpm. Such attainable grunt ensures a 3.1sec sprint to 62mph, while 0-124mph-0 takes a startling 13.7sec. The Agera’s top speed is quoted as ‘245mph+ estimated’. Should be plenty. Thanks to a chassis and body made up of carbonfibre, aluminium and Kevlar the new Koenigsegg weighs in at 1290kg. Essentially a rebodied CCXR, it shares the same dimensions but looks far wilder, with a mad interior to match. Just look at those dials… The Agera (the name is the Swedish verb ‘to act’, if you’re wondering) is revealed this week at Geneva, with order books opening at the same time. No prices yet, but if you have to ask, then it’s probably out of your reach. Click here for more news from the Geneva motor show See evo’s video road test of the mad Koenigsegg CCXR