New Porsche 918 Spyder, a hybrid supercar that laps the 'Ring in under 7.30mins 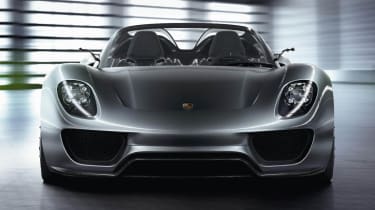 Porsche surprised everyone on the eve of the Geneva show by revealing the Porsche 918 Spyder prototype, billed as a potential successor to Porsche’s mighty Carrera GT supercar.  The 918 Spyder combines 218bhp of electric hybrid power for the front and rear axles with a mid-engined, V8 petrol engine (derived from the 3.4-litre power unit fitted to the RS Spyder racing car), developing more than 500bhp and having a maximum engine speed of 9,200rpm. Power from this engine is transmitted via a seven speed ‘Doppelkupplungsgetriebe’ (that’s PDK to you and me) gearbox to the rear axle, while the front wheels are directly driven via the electric motor.

Read about the Porsche 911 GT3 R hybrid here There’s a liquid cooled lithium-ion battery positioned behind the passenger cell, which can be re-charged via the car’s kinetic energy when braking or by plugging into the regular electrical network when the car is parked. A switch on the steering wheel allows the driver to choose four different running modes; E-Drive is for running on electric power only (with a range up to 16 miles), Hybrid mode for maximum efficiency, Sport Hybrid where the car uses both drive systems with the focus on performance, or Race-Hybrid for maximum performance complete with a ‘KERS’ type button on the steering wheel for additional electrical power when overtaking, for example. The cars features a monocoque bodyshell built from carbon fibre and boasts an overall weight of 1490kg.

Porsche Carrera GT takes on Veyron, Enzo and Zonda The result of having all this new technology is spectacular, both in terms of CO2 emissions and outright performance claims. Porsche claim the 918 Spyder will achieve an CO2 emission level of just 70g/km (equal to 94mpg) on the EU CO2 cycle, yet the 918 Spyder can sprint to 62mph in just 3.2secs, has a top speed of over 198mph and can lap the Nordschleife in less than 7minutes 30seconds, faster even than the Porsche Carrera GT. Will it go into production? Well, Porsche have a good track record of putting their concept cars into production so here’s hoping the Porsche 918 Spyder keeps up the tradition. If they do, then don’t expect to see it in Porsche showrooms until around 2013 at the earliest.