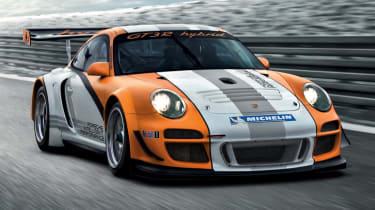 Porsche is taking a hybrid version of its 911 supercar to the 2010 Geneva motor show. It’s no ordinary 911, either – it’s the GT3 R racing car, perhaps the last place you’d expect to find a green-pleasing powertrain. Not that this one’s particularly green, of course. A 473bhp 4-litre flat-six engine powers the rear wheels, while two electric motors (each developing around 80bhp) power the front axle, effectively making this a four-wheel-drive GT3. Those motors are powered by an electric flywheel generator, which is charged up by regenerative braking each time the driver slows. And rather than cutting in automatically during the drive (or indeed race) cycle, the electric power is made available KERS-style, as the racing driver requires it for a six to eight second boost. The 911’s hybrid system is also intended to increase fuel efficiency. Ideal, really, as the car’s first big race with be May’s Nurburgring 24-hour race. And for Porsche, it really is about the taking part rather than the winning: racing the hybrid GT3 R will be ‘a ‘racing laboratory’ that will provide invaluable knowledge and insight on the subsequent use of hybrid technology in road-going Porsche sports car’. A road-going hybrid version of the next 911, then? Certainly sounds like it… The petrol-only 911 GT3 supercar takes on Aston + Audi R8 See Chris Harris’s video review of the Porsche 911 GT3 RS Follow evo on Twitter or Facebook for car news and views