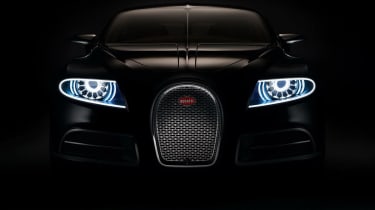 Bugatti has released more pictures of its ultra high-performance saloon. The 16C Galibier is a concept that previews a successor to the mighty Veyron hypercar, and while it is officially just a prototype with which to gauge public opinion, Bugatti is thought to be very keen to take it to production in three years time. If that happens, it will instantly become the most potent production four-door ever, with power and torque predicted to be 800bhp+ and 900lb ft. That’d be enough to take the two-ton Galibier to 62mph in sub 3-sec and potentially onto a 240mph top speed. Should customer reaction be positive enough, Galibier sales are expected to begin in 2013. If you want one, now’s a good time to start saving: it should cost around £900,000. See Bugatti Veyron take on the Nissan GT-R and Ferrari F40 Read evo’s in-depth insight into the new Bugatti 16C Galibier