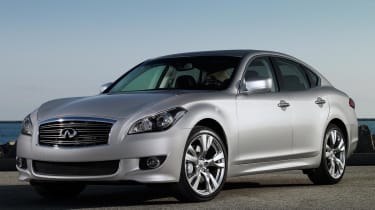 Infiniti has announced the specifications and prices for its flagship saloon - the M37.

Evo has already had its hands on the G37x - the M37s more compact, BMW 3-Series baiting, 4WD sibling - and it fared well with its gutsy engine and positive chassis. The M37 was developed for Europe and is Infiniti’s attempt to mix it with the more eminent European premium saloons such as the BMW 5-Series and Jaguar XF.

Five different grades of M37 will be available with basic prices starting at £35,150 and topping out at £45,000. All grades of the M37 are powered by Infiniti’s 3.7 litre V6 which puts 316bhp through the rear wheels and completes the 0-62mph dash in 6.2 seconds. A sports version - the M37S - corners with the aid of four-wheel steering, sports suspension and has a paddleshift for the seven-speed automatic gearbox.

Equipment levels are lavish in all models, with even the basic M37 having a reversing camera, hard disk sound system and Infiniti’s ‘Drive Mode Selector’ - which changes the car’s driving dynamics dependant on road conditions. The top-spec M37S Premium (from £45,000) ticks all the option boxes and gets an improved sound-system as well as the ‘Dynamic Safety Shield’ package that has the world’s first active blind-spot system. This helps ensure that the car cannot stray into the path of any vehicle in the driver’s blind spot.

Further M-models are due to arrive in October this year and spring 2011, with the M30d V6 diesel and M35 hybrid arriving respectively, catering for those more eco-conscious buyers.