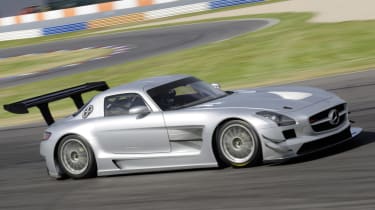 Fresh from the appearance of a slightly gaudy chrome SLS AMG GT3, Mercedes-Benz has opened the order books on its racing gullwing supercar ready for the 2011 motorsport season. As befits its name, the SLS will be compatible for all FIA GT3 regulation racing and deliveries will commence in February, allowing buyers to kick-off pre-season testing in plenty of time. Perhaps the two most exciting races a Mercedes SLS GT3 is suitable for are the 24-hour races of both Spa Francorchamps and the Nurburgring… Much like the roadgoing supercar, it’s been developed by AMG, the company keen to shout about its 40 years-plus in motorsport and the experience this has poured into the SLS. While the car looks close to standard, there are some rather obvious exterior tweaks, namely the fitment of a whacking great splitter at the front and suitably large wing at the back to match. Fuel filler pipes now fill the previously blank C-pillars, a move which immediately adds more purpose to the SLS’s looks. Beneath that long bonnet (and set behind the front axle) lies the standard car’s 6.2-litre V8 engine, with the FIA yet to determine its output using its ‘Balance of Performance’ principle (which takes into account the car’s kerb weight) to try and ensure fair competition. In showroom specification, the SLS’s key figures are 563bhp, 479lb ft and 197mph. The interior has been given a thorough overhaul for racing, with a carbonfibre safety cell, steel roll cage and central display unit which provides all the necessaries – track speed, engine rpm, operating temperatures and more. (Pictures this way). The SLS AMG GT3 will get its first competitive racing action later this year in the VLN endurance championship at the Nurburgring. It’s a place shaping up to become the car’s spiritual home, with an abundance of testing carried out there and plans for a full 24-hour support service for owners racing their SLS at round-the-clock races, including the increasingly popular event in the Eifel region. Sales books are open now, with the car costing 334,000 euros without tax – roughly £275,000, or closer to £325,000 with the addition of 17.5 per cent VAT.