John Simister reports on the story behind the Renault DeZir concept. Is a production version in the pipeline? 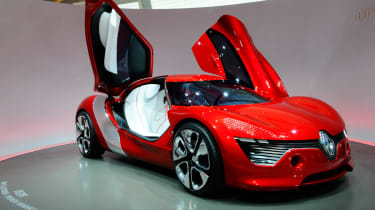 Does this mid-engined machine with its asymmetrically-hinged scissor doors and Audi A8-like side blades look like the next Renault Clio to you? Not exactly, perhaps, but that's the car the Renault DeZir concept previews. It introduces the new nose look created by recently-installed Renault design chief Laurens van der Acker, based on a giant version of the diamond badge and intended to remedy the aimlessness of recent Renault visages. The DeZir is an electric sports car, which uses the powertrain of the imminent Fluence saloon and the tubular chassis of the 'silhouette' Mégane Trophy race cars. It works, it runs, it's light and it's Tesla-quick. It even has proper door seals.

Intriguing ideas abound, including many perforations on the body which, up front, contain LEDS for the headlights. The black tail is made up of wave-like slats, calling to mind recent Mazda concepts also masterminded by van der Acker in his previous role. Inside, the driver's side is mainly red and fiery, the passenger's white and calm. It's meant to represent a man and a woman falling in love; the DeZir is the first of six planned Renault concepts reflecting different stages of life. 'Porsche is a car-centred brand, Toyota is a planet-centred brand,' says van der Acker, 'but Renault is a human-centred brand.'

Fine. But will the DeZir ever make production? Is this, in fact, the long-rumoured new Alpine? 'We're pushing for a production version with a petrol engine,' says Roman Chevalier, who did the under-skin engineering.

Product planning chief Beatrice Foucher offers more hope. 'Possibly we shall make an ultimate sporty car,' she says, 'a Renaultsport car with a normal engine, but it's not decided. As for Alpine, DeZir keeps the roots of what Alpine was and has a piece of the passion. It is not closed; we have hopes for Alpine but it must be useful [in a business sense].'

For now, the DeZir's role is to signal Laurens van der Acker's new, clearer design direction for Renault: 'It's as much for me as for you,' he says. As for a future Alpine, that could be another car altogether. "We had Alpine in mind when we did DeZir, of course. But we must look forward, not back.'