What's a concept car like to drive? Ollie Marriage reports from behind the wheel of the Renault DeZir 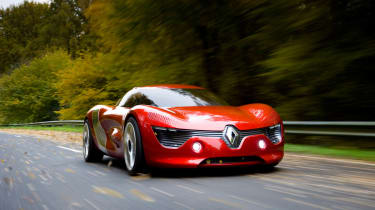 We’re in the woods north of Paris, tucked away on a test track that would look rather gloomy if it weren’t for the presence of the rather stunning Renault DeZir.

There’s always a suspicion with concept cars that, removed from the artificial glare and hype of a show stand, they’ll lose all impact and look pretentious and pointless. Not the DeZir. Launched at the Paris motorshow in September, we’ve been granted a few hours to get to grips with the car. And yes, that does mean we can drive it.

What you need to bear in mind at this point is that a concept car is a superficial thing – beauty is only skin deep. So the fact it uses the spaceframe chassis from a Megane Trophy racer does not mean it handles like one, it means it was the easiest thing to adapt. Likewise the 150bhp electric engine is borrowed from the Fluence and Zoe, leading Renault to claim the 830kg DeZir can hit 60mph in 5secs. But not today because the wick has been turned down so much that I wonder if we’re actually going to make it to the top of the test track’s only incline.

The seatbelts don’t work, reflections are so bad you can barely see out of the composite windscreen, the motors whine, the sculpted seat pads are not only ludicrously uncomfortable, but I have to sit on a sheet to prevent my jeans rivets marking the leather. Best of all, every time we use the radio to chat to the lead car that I have to follow around the circuit, one of the doors pops open.

There’s also an unavoidable cobbled section. The DeZir has 21-inch wheels and ‘basic’ suspension. The discomfort is staggering. Both doors pop open this time. At least it steers sweetly enough and the touch sensitive gearlever works nicely. After a couple of laps my passenger, the car’s exterior designer Yann Jarsalle, and I begin to chuckle at the absurdity. He hasn’t been allowed to drive it yet.

I then have a very informative chat with Thierry Koskas, Program Director of Electric Vehicles. He tells me that a mid-engined layout works really well for electric cars because rather than having an engine up front and a heavy battery pack in the boot, all the weight can be gathered together in the middle of the car. The DeZir will never make it to production, but Renaultsport would surely love to develop a mid-engined electric sports car. Maybe one day they’ll get the opportunity.