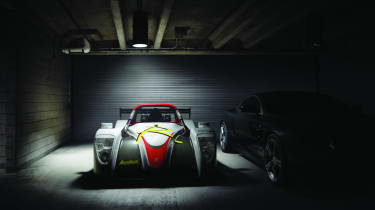 Caterham won’t be the only British Sportscar manufacturer unveiling a new road car at the Autosport International show on January 13th, Radical has one to unwrap too.  The SR3 SL may look like the track/race car that we have become very familiar with over the years, but this will the first in the range to be sold primarily as a road car, and it will have European Type Approval. Powered by the Ford ST engine - tuned to deliver 300bhp as standard – it remains Euro5 emissions compliant, and will feature switchable maps to manage the torque, with ‘road’, ‘wet’ and ‘race’ selections available.   This will be the archetypal racer for the road weighing in at only 675kg while boasting underbody aerodynamics, fly-by-wire throttle and a paddleshift gearchange with auto-blipper. There will of course be numerous track upgrades available and if that’s not enough Radical will also be pulling the covers off its new 2.7 RPX V8 engine.