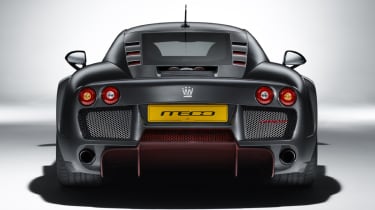 Noble has released official pictures of the production-ready M600. The British-made supercar boasts a full carbon body, with a mid-mounted 4.4-litre V8 engine powering the rear wheels. It boasts outputs of 650bhp and 604lb ft, and coupled with a sub-1200kg kerb weight, it possesses a 550bhp/ton power-to-weight ratio. That’s significantly higher than the Bugatti Veyron’s 521bhp/ton, and enough to give the Noble a 0-60mph time of less than 3.0sec and a top speed of 225mph. Yet more staggering is an 8.9sec 0-120mph sprint, achieved by Noble’s heavier pre-production car. That monster power output is switchable, with 450, 550 and 650bhp modes (select based on road conditions or your bravery levels), each possessing its own, tweaked throttle delivery, too. There is traction control, which is also adjustable, right down to being fully switched off via the appropriately named ‘Missile Switch’. Though according to evo’s Henry Catchpole on eCoty 2009, ‘the engine’s boost builds progressively – the Noble can be just as scary or docile as you want it to be’. Things certainly aren’t scary inside the M600, the interior being trimmed with Wilton carpet, a full carbon centre console & door panels and handcrafted, bespoke switchgear. There’s a wealth of options, too, including sat-nav and telephone control, Alcantara and leather trim (for no extra charge) and a fully exposed, lacquered carbon body. There’s a completely bespoke choice of colours, too, also at no extra charge. Rival super makers with lavishly priced option lists could learn something from Noble’s no-cost option philosophy. That said, prices are yet to be announced, though there are currently 52 deposits down according to Noble Cars MD Peter Boutwood, with a number of export enquiries prompting left-hand-drive production. Deliveries are scheduled to begin in April 2011. Read our Noble M600 supercar review here See the Noble M600 on-track video action here How did the Noble do at evo Car of the Year 2009?