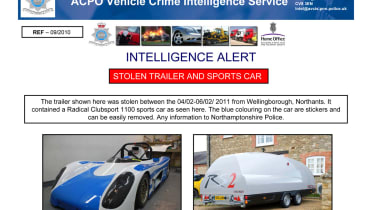 As you may have seen on evo's Twitter and elsewhere on the internet, we lost our Radical Clubsport 1100 and the Brian James RS2 trailer that contained it last weekend. The pair were parked in the Evo Towers car park in Wollaston, Wellingborough but disappeared between the evening of Friday 4 February 2011 and the morning of Sunday 6 February.

Please see the pictures on the right and the Police release above. If you recognise anything or have any information, please contact us via rogerg@evo.co.uk or 0207 907 6322. The trailer is pretty large and distinctive, and would have been around the Northamptonshire/Bedfordshire area at some point over the weekend as it left our premises. The Radical's chassis VIN number is 0049, and when it was taken its white bodywork was sporting a distinctive bright blue wrap, with lots of evo logos and race circuit maps. The four-wheeled trailer had a large 'RS2' logo on the back, and its VIN number is SJANTRSGBDAD111381.