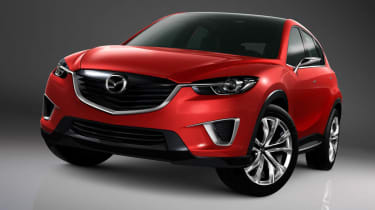 Mazda has confirmed its forthcoming compact crossover will be called CX-5.  Sitting below the CX-7 SUV in the range, it will compete in a busy market sector that includes the Ford Kuga, BMW X1, Volkswagen Tiguan and Kia Sportage. The CX-5 will debut Mazda’s latest ‘KODO’ design language, as first seen on Minagi concept car (pictured) which the production CX-5 will closely resemble.  As well as the styling flourishes, the CX-5 will feature the first usage of Mazda’s Skyactiv project, the firm’s new-generation engines, transmissions, bodyshell designs, and chassis engineering. The fight to combine driver satisfaction with efficiency in the every-busy crossover segment could be the deciding sales factor in many potential markets, so we’d hope the CX-5 can replicate some of the fun of its near-namesake, the Mazda MX-5… The production CX-5 will be revealed at September’s Frankfurt motor show, before going on sale in 2012 with prices likely to start at around £20,000.