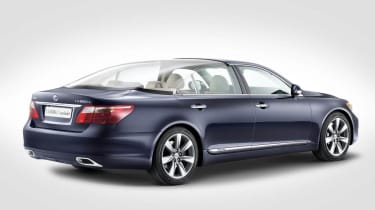 Lexus has revealed what it describes as a ‘one-off Landaulet version’ of the LS600h, which is set to serve as the royal wedding car when Prince Albert of Monaco gets married next month.

Unlike a traditional open landaulet, where rear-seat passengers sit in the open, the LS600h features a one-piece transparent polycarbonate roof at the back which has been manufactured using techniques normally employed for making the canopies of jet fighters.  The car also uses extensive kevlar and carbonfibre reinforcement to help it maintain structural rigidity. The petrol-electric drivetrain of the standard LS600h saloon is used unchanged.

Historically, the concept of a landaulet was very popular with public figures - and especially dictators - as it allowed rear seat occupants to be seen by crowds (and possibly even to salute, at the risk of a face full of road debris.) The idea died out as the security risks of assassination became more obvious, although Maybach markets a landaulet version of its XXL 57.

The Lexus conversion was carried out by Belgian coachbuilder Carat Duchatelet and,  probably unsurprisingly, it’s a one-off. After its wedding duties – most of which will be carried out in full electric mode – the car will be heading for display in Monaco’s Oceanographic Museum.