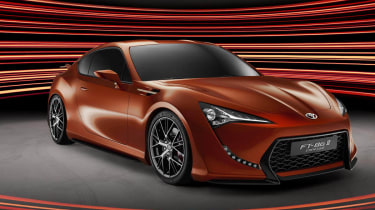 Toyota has released new photos and a teaser video of the highly anticipated FT-86 sports coupe at the Frankfurt motor show.

It is a joint project between Toyota and Subaru, which Toyota is hoping will help restore its sporting credentials after the hybrid eco-fest of recent years. It's front-engine/rear-drive layout should certainly help.

The car is set to get a free-revving 2-litre four-cylinder boxer engine up front, sending around 200bhp to the rear wheels via a six-speed manual transmission. Although a relatively modest power output, the overriding theme for the engineers has been to keep size and weight down, so a sub-7.0sec 0-62mph time is likely.

The concept has a 2570mm wheelbase and is 4235mm long, 1795mm wide and 1270mm high, a size comparable to a Volkswagen Golf GTI, though lower in height. The powertrain and driving position have been set as low and far back as possible to keep the centre of gravity down and weight distribution optimal. Toyota says this ‘gives the car lively, accessible performance that is easy to harness and enjoy.’ It has previously photographed the FT-86 with the Corolla AE86, a cult car amongst Japanese drifters, giving an insight into Toyota’s ambitions.