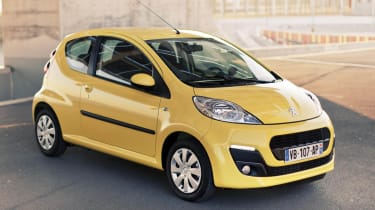 Peugeot and Citroen’s city car twins have been updated. The 107 and C1 – identical under the skin – are real evo favourites, despite their modest power output. And with the arrival of the new Volkswagen Up and Fiat Panda, they’ve been refreshed in order to stay competitive. Their titchy 998cc, three-cylinder petrol engine remains, serving up 68bhp and 70lb ft. It’s enough for a 14.2sec 0-62mph mooch on the way to a 100mph top speed. Figures which hardly set the city car class on fire, admittedly, but the 107 and C1 (and their Toyota Aygo relative) have always been about more than that, offering up a fun drive and warbly three-pot soundtrack. Where tweaks have been made are with mpg and CO2 emissions – the former rising to 66mpg and the latter reduced to the all-important 99g/km, cutting both road tax costs and the London congestion charge to zero. It’s one of very few petrol-powered cars currently available to dip below the 100g/km barrier. Both cars also get a light restyling – the clean look of the 107 perhaps most successful, allowing it to echo the stylish new 208 – and new equipment is available, with different alloys, Bluetooth and USB connections and LED running lights among the fresh kit. There’s also an ‘Electronic Gearbox System’ available, an auto option with steering wheel-mounted paddles though lower mpg (62.8) and higher CO2 (104). The cars make their world debut at the relatively quiet Brussels motor show on January 10, sales beginning next month. The C1 is yet to be priced, but it should be pretty tightly in line with the 107, whose range kicks off at £7995.

See why we like the Citroen C1 so much here