Ferrari pulls the wraps off its contender for the 2012 Formula 1 season. News and pictures here 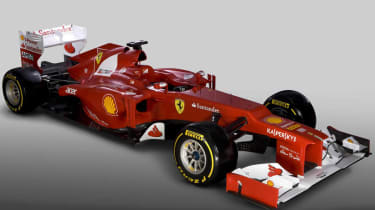 Ferrari’s new F1 car, the F2012, has been revealed live online, after snow cancelled the live unveiling event. The design of the new car has had a mixed reaction from fans; even Ferrari reckons the nose ‘is not aesthetically pleasing’.  That’s because the front wing has further evolutions planned for the opening races in the new season, but currently has a step in centre of it to conform with F1 regulations and to raise the bottom of the chassis for aerodynamics. The rear wing is similar to the one used in 2011 but has been heavily revised and is now more efficient.  Known to Ferrari insiders as the 663, the latest car is the Scuderia car maker’s response to new technical regulations.  These largely concentrate on the height of the chassis front section, exhaust position and engine management. The rest of the car has been heavily revised over the 2011 car. Changes include side impact structure modifications and repositioned radiators, giving a different side to the previous generation car. The lower part of the car is much narrower and more tapered than before thanks to a new gearbox casing and relocating mechanical components. No changes have been announced for the engine due to F1 regulations, however the mounting of the engine has been revised to aid aerodynamics. Pull-rod suspension features both front and rear with Drag Reduction System (DRS) and Kinetic Energy Recovery System (KERS) featuring on again. Being the 58th car Ferrari has built for F1, we will have to wait until the new season starts in March with the Australian grand prix to see if its latest generation of F1 car is a real championship contender. Three test sessions, at Jerez and Barcelona, are planned before the start of the season.  The last time Ferrari took a manufacturer championship was back in 2008 courtesy of Kimi Raikkonen, who returns to the sport with Williams. Ferrari’s hopes lie with the new F2012 car and drivers Fernando Alonso and Felipe Massa.