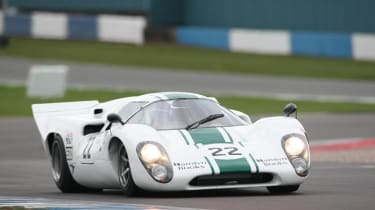 Lola Cars has applied for administration. The race car manufacturer has cited a drop in trade from the economic downturn, and the move affects its fabrication arm, Lola Composites, too. Lola, who employs 172 people in Huntingdon, England, sees it as an important step to seek a new investor or purchaser, one which we hope saves the 54 year old company. Lola Cars International has enjoyed a host of motorsport success, and is best known for sports car racing, not least its Le Mans 24 Hour entries. Lola Composites Limited majors in many fields, including aerospace and defence as well as automotive, aiding Caterham with its recently launched SP/300.R track car. Here’s part of the statement released today by Lola Group Holdings. ‘The latest economic downturn and the decision of HMRC not to pay ongoing R&D tax credits has caused a serious cashflow problem for the businesses.  It is with enormous regret that a decision has been taken to issue Notices of intention to appoint an Administrator to Lola Cars International Limited and Lola Composites Limited.  This step allows the board to continue its discussions with possible investors and prospective purchasers with a view to securing the best outcome for the staff, creditors and customers of both businesses.

‘The Lola board have declined to make further comment until Monday 21st May.’