Mitsubishi's electric car to take on the Pikes Peak hillclimb. 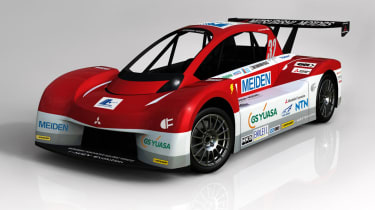 Mitsubishi has revealed its plans to enter a heavily modified version of its electric iMiEV in the 2012 Pike’s Peak International Hill Climb this July. The iMiEV, a small electric car, is sold in Europe along side the identical Citroen C-Zero and Peugeot iOn, and recently went on sale in the USA.

The iMiEV ‘Evolution’ uses the same motor and battery as the standard road car, but that’s where the similarities end. Four-wheel drive replaces the standard car’s rear-wheel drive set-up, and the Lancer Evo-sized wheelbase and track give it a purposeful stance, while the custom lightweight bodywork and aero kit finish it off.

Along with the Evolution, Mitsubishi will be entering two other iMiEVs, one mildly modified car with a few aerodynamic changes, and another completely standard car.

Last year, Nissan brought a Leaf to the legendary hill-climb, running a respectable time of 14 minutes and 33 seconds – which will be the electric time to beat in 2012.